Register for Financial Planning Today website for FREE to view more stories and get our daily newsletters. Click on 2 stories to see Registration pop up.
Tuesday, 31 March 2015 00:00

ICO to investigate sale of pension data to cold callers 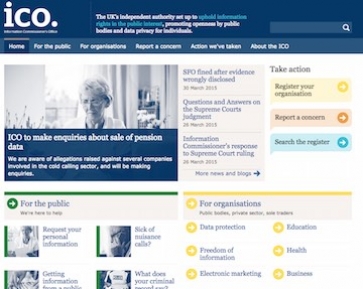 The Information Commissioner's Office, the body responsible for uphold information rights, is to probe allegations that firms have passed on sensitive individual pensions data.

The ICO, which protects consumers against the abuse of their personal data, said that allegations have been made about firms passing on sensitive financial data, including pension information, which is being used by cold calling companies.
A spokesman for the ICO said: "We're aware of allegations raised against several companies involved in the cold calling sector, and will be making enquiries to establish whether there have been any breaches of the Data Protection Act or Privacy and Electronic Communications Regulations."
The investigation follows reports in the Daily Mail that allege that pension details from millions of people are being sold on to potential fraudsters and cold-calling firms for as little as 5p per record.
The newspaper says that companies are selling information about salaries, investment values and pension size, ahead of new pension freedoms which come into effect from 6 April and will allow people to withdraw their entire pension pot in one go.

The fear is that unscrupulous companies may use the date to cold call or target retirees to get their hands on the billions of pounds in pensions which are likely to be released each year.
The ICO told the BBC that the claims were "very serious" and it is talking to The Pensions Regulator, the Financial Conduct Authority and the police.
The Daily Mail said that its investigative reporters were able to purchase pension details easily by claiming they were from a cold-calling company. The ICO has stated its concerns previously that the pension changes coming in could lead to more people being cheated in future.
There are strict rules about data protection in the UK but it's known that data lists for millions of consumers are readily available at a modest cost allowing cold call companies and scammers to target huge numbers of consumers.
The ICO has powers enabling it to issue fines of up to £500,000 for the most serious data breaches and can also pursue criminal prosecutions.

More in this category: « Supporting family puts the squeeze on retirees Complaints fall by 7% but more grumbles on banking »
back to top