Register for Financial Planning Today website to get our daily newsletters. Click on 2 stories to see the Registration pop up.
Wednesday, 13 May 2015 00:00 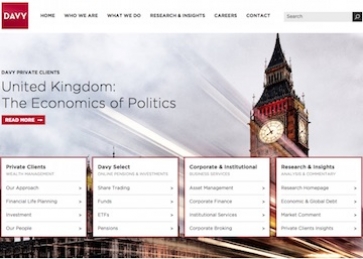 Graham Corry Cheevers is a financial advisory and investment firm based in Belfast. The Davy Group is based in Dublin, with offices in London, Belfast, Cork and Galway. It employs more than 560 people,

The firm is headed by its three founding partners Brian Corry, Gavin Graham and Nigel Cheevers and has approximately 2,500 clients with £230m in assets under management. Completion of the deal is set to take place on 1 June 2015 when the firm's partners and experienced team will relocate to Davy's private client business located in Donegall Square, Belfast.

Davy opened its Northern Ireland office in 2007 and last year it announced the acquisition of Belfast-based Square Seven Financial Planning. Staff numbers in Belfast have grown from six to over 30 and assets under management from £120m to more than £640m

Stephen Felle, chief executive of Davy Private Clients UK, said: "We see Northern Ireland as an area of key growth for the firm and plan to further consolidate this position in the near term as we assess further strategic acquisitions like Graham Corry Cheevers."

Mr Felle said further acquistions in the UK were being considered.

Brian Corry, Gavin Graham and Nigel Cheevers, said in a statement: "Having conducted a thorough review, we felt it was time to join a firm that has the requisite financial and infrastructural resources to meet our clients' evolving needs in the years ahead."

Graham Corry Cheevers is Davy's sixth acquisition in four years including the purchase of Bloxham in 2012, Prescient (formerly AIBIM) in 2013, and Square Seven and iCubed in 2014, as well as the recent acquisition of Trusted Advisor Group.