Register for Financial Planning Today website for FREE to view more stories and get our daily newsletters. Click on 2 stories to see Registration pop up.
Tuesday, 04 October 2011 12:13

Delegates rewarded for excellence with IFP Awards announced at conference 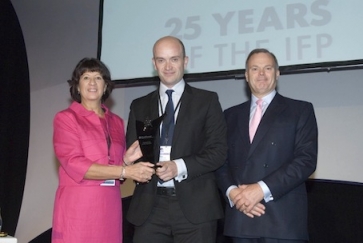 Delegates were rewarded for their talents today as the first set of awards were presented at the IFP conference at the Celtic Manor resort in front of more than 600 attendees.

At the official opening of the conference by chief executive Nick Cann and IFP president Marlene Shalton, three delegates were awarded the prestigious prizes.

The first prize was the David Norton 'Building Excellence' award which is presented to the firm judged to have outstanding potential to develop as a successful Financial Planning firm.

The prize is named after former IFP president David Norton and was awarded to Fiscal Engineers. Runners-up were Cooper Parry and Brook Dobson Brear.

Next was the prize for the best Financial Planning of the Year student. This went to Joshua Guile from Manchester Metropolitan University for his work on the case study as part of his undergraduate degree course.

The final prize was for Paraplanner of the Year which recognises the outstanding contribution of Paraplanners in the Financial Planning profession.

To win this prize, the Paraplanner must complete a technical and a written assessment as well as have a testimony from their employer.

The award was given to Paraplanner Gary Tunstall CFPCM from Brook Dobson Brear who was described by Martin Vaughan as "epitomising what Paraplanning is and providing inspiration to all Paraplanners".

Mr Tunstall said: "It's fantastic, really tremendous to feel at the pinnacle of my profession." He has worked as a Paraplanner for 10 years and recently qualified as both Chartered and Certified Financial Planner.

Two further awards, the Branch Chairman of the Year and the Tony Sellon Memorial Prize 'Good Egg' award, will be awarded at the Gala Dinner this evening.

More in this category: « US Financial Planning Guru Moves to London FSA appoints Wheatley as MD, consumer and markets business unit »
back to top