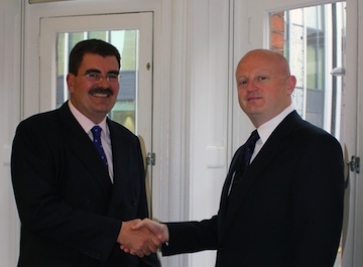 Chris MacDonald, left, is stepping down from the role.

An HSBC boss has been snapped up to become the new group chief executive at investment manager and financial advice group Brooks Macdonald, as co-founder Chris Macdonald steps down from the role.

Caroline Connellan, 43, will join from the bank in April 2017, subject to regulatory approvals.

The ex-Standard Life group strategy director has more than 20 years experience in financial services, most recently as head of UK premier and wealth at HSBC where she has led the transformation of the UK wealth business.

A former consultant at McKinsey, she started her career as a fund manager with Newton Investment Management in London.

Chris Macdonald will remain with Brooks Macdonald as chief executive before becoming deputy chairman with effect from April 2017.

As deputy chairman, Chris will also serve as an adviser to Brooks Macdonald to support the continued growth and development of the group.

It is the intention of the Board that subject to shareholder approval Chris would take on the role of chairman in the future.

These changes continue the process begun last year to deepen the group’s senior management team whilst enabling Chris, the group’s co-founder, to evolve his role in line with the strategic objectives of the group.

“Caroline brings significant wealth management experience that will be critical to delivering the Group’s strategy and we are confident that she will bring a valuable external perspective which, together with our experienced management team, will enable us to meet our clients' expectations and to drive further growth in our business.”

He said: “Chris has been central in the foundation, development and significant growth of Brooks Macdonald over the last 25 years. His new role as deputy chairman will ensure the group continues to benefit from his experience and expertise as it fulfils its growth ambitions.”

More in this category: « Percival to update planners on DFM due diligence UK's gap between tax owed and collected falls to lowest ever »
back to top