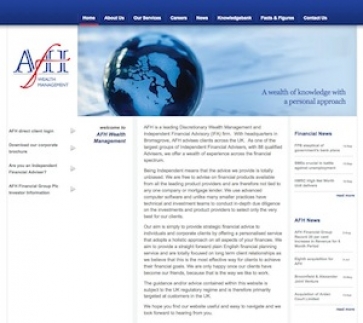 A wealth manager has intimated that is closing in on more IFA takeovers.

AFH Financial, which described itself as a Financial Planning-led wealth management firm, said it had a “strong pipeline of potential acquisitions under negotiation”.

In a financial performance report, it stated that “AFH (is) well positioned to continue to take advantage of ongoing IFA market consolidation”.

“The success and robustness of this policy is reflected in the high level of acquisitions meeting or approaching earn out targets and the strong cash flow generated by the business to finance these earn out liabilities.

“The board's focus on shareholder value has meant that the execution of acquisition opportunities has been slower than previously anticipated, but a strong pipeline of acquisition targets has been developed during the second half of the year with negotiations ongoing.

“The board will continue to execute its strategy of making selective acquisitions and increasing the breadth of AFH's national footprint whilst providing a professional and cost effective service to our clients, and believes that AFH remains well positioned to take advantage of opportunities as they arise.”

During the last 12 months, AFH completed the acquisition of the assets of CRS Financial Planning, an East Anglian based IFA, for a maximum £663,670 fee, adding approximately £25m to AFH's funds under management.

Over the year, the company paid more than £4m in earn out consideration at an average level above 90% of the maximum price negotiated for acquisitions undertaken during prior years, which it said reflected the strong performance of the acquired businesses within AFH.