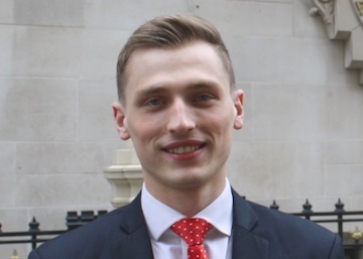 A 22-year old wealth manager has become the youngest ever Fellow of the Personal Finance Society.

Vito Faircloth has set out ambitions to become “one of the leaders of the industry”, after achieving the accolade.

He started out with Chartered Financial Planning firm Attivo Group In Cheltenham last year and now works for Investment Quorum.

He joined the boutique wealth manager in London in August where he works under CEO Lee Robertson.

Mr Faircloth bypassed university, moving to London as a broker in 2014 following a brief stint working in the IT sector.

“I really wanted to combine my love of finance and my passion for speaking to and helping people. I tested the water as a broker and knew this was definitely what I wanted to do,” he said.

In 2015, Mr Faircloth joined Attivo Group, where he qualified as a Level 4 financial adviser in August 2015 and as head of the firm’s corporate advice team, oversaw a 50 per cent increase in divisional revenue.

He now advises a range of high net worth clients.

He said: “I want to be the best adviser I can be because it’s such a privileged position to be in. Sat in front of someone as a 22 year old and in essence they’re putting their retirement in my hands – it doesn’t get much more privileged than that.

“One of my first goals is to become one of the best advisers in the UK and one of the most competent as well.

“The next step is going to be building those soft skills even more under the teaching of our CEO Lee Robertson, director Petronella West and chief investment officer Peter Lowman – they’ve got so much experience between them.”

“Longer term I want to be one of the leaders of the industry – I’ve got that strong tech background and I think our sector is moving towards tech more and more over time, so I think I’ll be well placed to do that.”

“He is clearly a bright, enthusiastic and passionate member of our profession, and a role model for young and aspiring financial advisers across the country.”

Mr Faircloth, who was named the Insurance Institute of Cheltenham and Gloucester’s Achiever of the Year for 2016, said young advisers had a huge role to play in meeting future advice needs.

“There’s such a drive to encourage young people into the industry because of the demographics of advisers,” he said.

“Clients like the fact that I’m young and fresh, and as I always say, would you rather that you outlived your adviser or your adviser outlives you?”

More in this category: « Client wins FOS case after Sipp advice complaint Percival: FCA will catch you out if you 'retrofit' DFM due diligence »
back to top