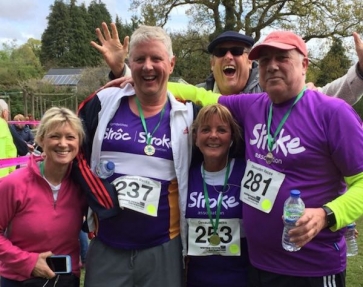 Ex-IFP chief Nick Cann is going to close the CISI’s Financial Planning Conference, it was revealed this afternoon.

Mr Cann, who suffered a stroke in 2013, resulting in him losing his speech, was the chief executive of the Institute of Financial Planning until it merged with the CISI in late 2015.

Mr Cann said: “I am delighted to be asked to close this year’s annual Financial Planning conference and I look forward to meeting up with old colleagues and friends at the event.”

The event takes place from 25-27 September.

With a combination of rehabilitation and personal conviction, he has made incredible strides both on the road to recovery and in the support of other stroke sufferers.

He recently performed a solo as part of a singing-based therapy for stroke survivors. See video below.

Since his life-changing illness Mr Cann has set out to raise awareness and funds for the Stroke Association. This has involved him completing distance cycle event and he has recently completed a 5km run.

Jacqueline Lockie  CFPTM Chartered FCSI, CISI Deputy Head of Financial Planning, said: “We are so pleased that Nick has agreed to close our Conference in September. His motivational presentation will be centred on overcoming difficulties and never giving up. It will be a truly inspirational session, focused on his own experience and testament to his tenacity and optimism.

“This is definitely a session not to be missed and we thank Nick for agreeing to be involved.”

The CISI’s nominated charity for this year’s Conference is Breast Cancer Now and it will also be making a donation to the Stroke Association.

On stage now we have @Nickcanncfp presenting his incredibly moving and inspiring story. #StrokeAssembly pic.twitter.com/w4JRrCaDaY

Emotional talk by @Nickcanncfp Sharing experiences of stroke and aphasia #strokeassembly topped off by him singing ? pic.twitter.com/7Pdyl5tPdL

Nick shares some of his goals, with 'sprinting' among them, then shares a clip of him succeeding at singing. Powerful! #StrokeAssembly pic.twitter.com/GNwo7Le8lz

Wow that is fabulous x