Register for Financial Planning Today website for FREE to view more stories and get our daily newsletters. Click on 2 stories to see Registration pop up.
Monday, 21 August 2017 11:41 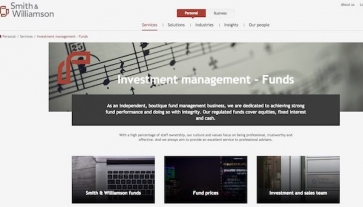 Rathbone‎s and Smith & Williamson have confirmed they are in exclusive talks which may lead to merger creating a group with £50bn under advice.

A merger would create a larger financial group with extensive fund management, accountancy and Financial Planning and wealth management divisions. Sky News broke the news at the weekend and reported that the move would value Smith & Williamson at close to £600m.

Rathbones has confirmed the talks but has urged caution and says there is no certainty a merger will be agreed.

A Rathbones statement said: “Further to recent press speculation, Rathbones confirms that it is currently in exclusive discussions with the Smith & Williamson group of companies regarding a possible all share merger of the two groups.

“Whilst these discussions have been underway for some time and the boards of both Rathbones and Smith & Williamson are confident that the combination would bring meaningful benefits for the stakeholders of both businesses, discussions are ongoing and there can be no certainty any transaction will be agreed.

“However, if agreed, any such transaction will be subject to the approval of shareholders. A further announcement will be made as and when appropriate.”

The two companies employ approximately‎ 3000 people in total. Rathbones is best known as a fund manager but has a growing Financial Planning division.

Smith & Williamson is the UK’s eight biggest accountancy practice but also offers a wide variety of other services including tax planning, financial advice to families, individuals and businesses and fund management. It employs more than 1,700 people and has 12 offices across the UK, Ireland and Jersey.

More in this category: « Govt to ban pensions cold calling after campaign Young planners can win £2k to attend South Africa conference »
back to top