Register for Financial Planning Today website for FREE to view more stories and get our daily newsletters. Click on 2 stories to see Registration pop up.
Tuesday, 22 August 2017 15:37 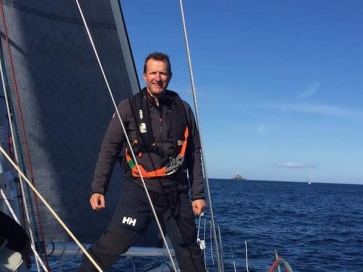 A Norfolk-based IFA has channelled his inner Sir Ben Ainslie to take part in a gruelling sailing race for charity.

Carl Lamb, managing director of Almary Green, fulfilled a lifelong dream when he took part in the Rolex Fastnet race last week, known by many as the ‘Everest’ of competitive sailing.

The race saw competitors sail from Cowes on the Isle of Wight to the Fastnet Rock Lighthouse, situated four miles off southwest Ireland.

Racers then sailed to Plymouth Harbour, with competitors travelling a total distance of 605 miles during the event.

Mr Lamb and his crew on the boat Rocket Dog II completed the event in the early hours of day five.

France was the overall winner of the race for the third time in a row, with a record fleet of 362 boats taking part in the Fastnet race in total.

Mr Lamb, who is a keen sailor, took part in the race to raise money for the charity Sail4Cancer, which provides water-based days out and short-breaks for British families who are affected by cancer.

The charity also makes grants to UK-based care institutions and supports research into the positive effects of sport and how it can help with cancer prevention and recovery.

Mr Lamb has raised £3,500 for the charity so far through sponsorship, describing the race as “exhilarating but exhausting.”

He said: “I have a number of clients who have dealt with cancer over my 30 year career as a professional IFA. The strength and will-power to get on with their respective lives whilst dealing with this disease has always inspired me to live life to the full and never take anything for granted.

“Sail4Cancer offers an amazing opportunity for families affected by cancer and I am proud to support them.”