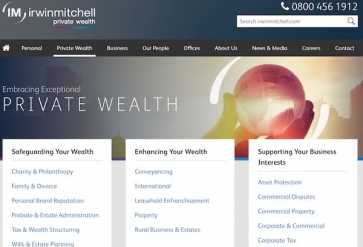 A London-based private wealth firm believes that more women are set to seek financial advice due to the growing complexity of divorce settlements.

Irwin Mitchell Private Wealth says recent studies suggest a new approach to advising women on the financial implications of divorce is needed due to indications that divorces are becoming more challenging and old assumptions are being overturned.

A recent study by Investec Wealth & Investment found that an increasing number of women were seeking financial advice, with the largest factor attributed to a rise in divorces. According to the research over 51% of financial advisers attributed the rise in female clients to divorce. Some 19% said that the rise was due to female entrepreneurs being more successful and 35% said the rise was due to the death of a spouse.

Irwin Mitchell Private Wealth, part of a larger legal firm, says that with family case law becoming increasingly more complex, along with the traditional roles in a family being upturned as women often equal or surpass their partners’ income, the increase in the number of women seeking advice was “inevitable.”

Irwin Mitchell Private Wealth has highlighted recent high-profile examples of how matrimonial finances are becoming increasingly “nuanced” in case law. In the 2017 Sharp v Sharp case, a City trader appealed against the 50:50 financial split of £5.45m which awarded £2.7m to her husband.

The Court of Appeal considered it relevant that they had split restaurant and household utility bills and that the husband had not been privy to the details of the bonuses received by the wife, but noted the wife had also gifted three cars to her husband. In light of this, the husband’s award was reduced to £2m.

Irwin Mitchell Private Wealth says the case highlights how matrimonial assets may be divided unequally in certain circumstances, though it is important to note the couple’s circumstances – they had no children and were married for the relatively short time of six years.

Ros Bever, national head of Family Law at the firm said: “I’d fully anticipate seeing more women seeking advice from financial bodies in the future. With an increasing number of assets being held jointly or in their own name, it is no longer always the case that family assets should be split down the middle.

“In many cases the needs of each party will remain the overriding factor and the court will be concerned to ensure that those are met. However where there is or is likely to be a surplus, it would be wise for each partner to protect their interests.

“A pre or post-nuptial agreement can clarify how assets should be dealt with on relationship breakdown.”

The Investec study also noted how women were increasingly on a par with their husbands in control over matrimonial assets, with 27% of 2017 clients taking on joint responsibility for finances in comparison to the estimated 23% from 2012.

More in this category: « Investoo acquires robo-adviser comparison site PASA to mediate on pension transfer admin »
back to top