Register for Financial Planning Today website for FREE to view more stories and get our daily newsletters. Click on 2 stories to see Registration pop up.
Friday, 06 October 2017 08:52 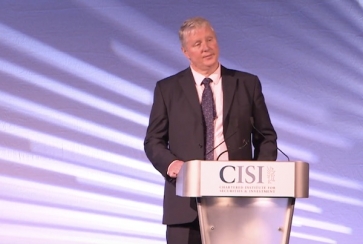 The CISI has made available a video of former IFP chief executive Nick Cann's moving speech at this year's CISI-IFP Financial Planning Conference which earned him two standing ovations from delegates.

Mr Cann, who suffered a major stroke in 2013, received two standing ovations at the conference with his moving account of his battle to rebuild his life following his devastating stroke which robbed him of much of his power of speech and caused weakness on the right side of his body.

You can view the video on YouTube by clicking the link below or scroll to the bottom of this story:

The CISI has posted the video on its CISI-IFP Forum where tributes have poured in for Mr Cann's courage in giving a presentation despite his disabilities.

Keri Carter CFP said: "So fantastic to see how someone can come back from a life changing moment and still embrace life - what an inspiration you remain, Nick!! Xx, Nigel Tate CFP said: "Such an impressive man, different in some ways than before but still as strong an individual as he was before his stroke. Kia Kaha Nick, Ian Wishart wrote: "Awesome Nick" and wife Jo Cann said: "Well done so proud of you ❤️."

More than a dozen people have paid tributes to Mr Cann's closing speech about the importance of overcoming adversity and continuing to make a contribution.

Giving the closing keynote of the three day conference, Mr Cann won his first standing ovation for his presentation on his battle to recover from stroke and give meaning to his life by fundraising and striving to get back to health. Using video, slides and some single words he was able to speak to describe what happened when he suffered the stroke and afterwards.

He won his second ovation for entertaining delegates at the end of his presentation by singing two songs, one from Les Miserable, one of his favourites, and the hymn 'You'll Never Walk Alone.' While aphasia caused by the stroke has damaged his ability to speak more than a word or two, he has found that he can sing as it uses a different part of the brain.

Many delegates were in tears after his presentation.

Mr Cann also announced at the conference his targets in the coming year were to raise £100,000 for the Stroke Association (he has already raised £68,000 with sponsored cycle rides and other events). Among his other personal targets are to play tennis using his weakened right arm, doing more sport and making the wedding speech for one of his daughters who is getting married in November.

Mr Cann's stroke happened four years ago as he was about to speak to a group of students about careers in Financial Planning.

He explained to conference delegates about the physical impact of his stroke and how it had affected him and his family both physically and mentally. He said his family and friends had been key to encouraging him to carry on and try to rebuild his life.

Mr Cann was chief executive of the Institute of Financial Planning until it merged with the CISI in late 2015.