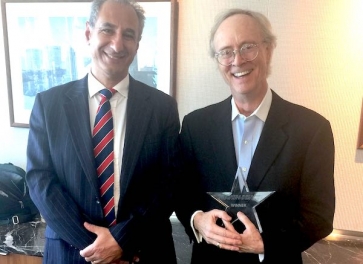 The Transparency Task Force is a UK-based group committed to bringing together professionally-minded individuals and ethically-led organisations. It presented the award at its first United States event in Boston’s Financial District recently.

The Transparency Trophy was created to recognise those in the financial services sector who seek to challenge the traditional sales bias and obfuscation that exists in parts of the financial industry.

Andy Agathangelou, founding chair of the Transparency Task Force, is in talks to expand his organisation’s symposiums to major cities throughout the US.

George Kinder, a columnist for Financial Planning Today, is also due to speak in the US and UK at a number of Life Planning and other events in anticipation of the release of his new book A Golden Civilization.

The book looks at how to create a civilization that thrives with freedom for all for thousands of years. He begins with the economic and political crises of the current era and the distrust of financial advisers and politicians. With a core focus on financial advice, he looks for the systems and structures that could sustainably produce a ‘Golden Civilization’.

The Kinder Institute has 3000 adviser members in 30 countries on six continents.