Correction fears prompt 1 in 3 wealth managers to up cash 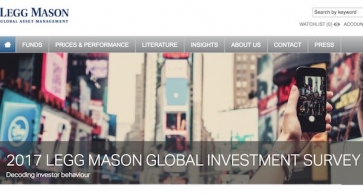 A survey by fund manager Legg Mason has found that a third of wealth managers (32%) say they are holding more cash across clients’ portfolios to protect against a market correction.

The survey suggests that wealth managers, collectively responsible for more than £100bn, are increasingly concerned that markets have become over-valued following a year in which most sectors have seen significant rises.

Alex Barry, head of UK sales at Legg Mason Global Asset Management, said: “Having seen so many assets appreciate meaningfully throughout 2017, it is understandable wealth managers may be adding some protection to portfolios now.

Despite this, he believes that investors should be open to taking on more risk above cash.

He said: “With interest rates near record lows, the environment remains supportive for investors keen to take some risk to achieve a return above cash, and we could see a continuation of the current trend for some time to come.”

In total, 44% said they were somewhat optimistic about investment opportunities in the coming year, with a further 37% optimistic.

Mr Barry noted that some investors are finding opportunities in some specialist sectors, such as emerging market debt and structured products.