Register for Financial Planning Today website for FREE to view more stories and get our daily newsletters. Click on 2 stories to see Registration pop up.
Monday, 08 January 2018 13:50 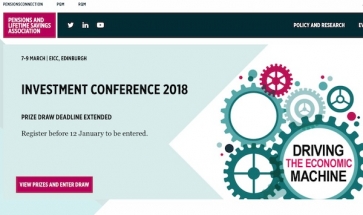 The Pensions and Lifetime Savings Association

The Pensions and Lifetime Savings Association is reminding stakeholders that the deadline for responding to its Hitting The Target consultation is 12 January.

The PLSA’s Hitting The Target consultation, which launched in October 2017, is designed to help people define and meet their retirement goals.

The initiative was created in response to concerns raised by 78% of people aged 18 to 64 that that they did not know how to track their retirement savings to see if they are on target.

One of the proposals made by the PLSA is to develop a set of National Retirement Income Targets based on research carried out ahead of the New Year.

The research is based on 2004 British adults between 28 December and 2 January 2018, and conducted by Opinium. Data were weighted by region to be representative of all British adults.

The research found that setting a realistic target was the most common method (31%) chosen by people to help them achieve their New Year’s resolutions. This was followed by having a clear set of goals (21%), taking the time to focus on what needs to be achieved (15%) and having a clear set by set plan to follow (13%)2.

"While this welcome success has achieved a great deal in starting more people saving towards retirement, we hope that income targets will address one of the key challenges facing savers today – that there is currently no generally understood target for retirement income.

"Our research has shown that 77% of people do not know how much they need in later life4. It is therefore great to see that so many people find targets and budgets helpful with financial resolutions – it suggests there is a strong basis for income targets working in practice."

He added: “With our research revealing that 40% of respondents are planning to make financial New Year resolutions, we hope that people are considering their pension options. This is a great opportunity to prepare not only for the year ahead, but for a better income in retirement.”

More in this category: « 60% of financial advisers use social media Ascot Lloyd and Bellpenny ditch restricted advice »
back to top