Register for Financial Planning Today website for FREE to view more stories and get our daily newsletters. Click on 2 stories to see Registration pop up.
Thursday, 18 January 2018 10:00 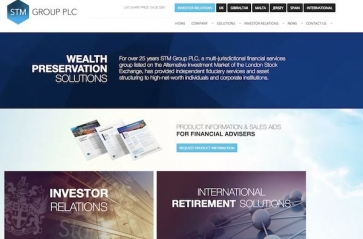 International SIPP provider STM has agreed with the Gibraltar regulator to use Deloitte to carry out a Skill Persons Review of the company following previous intervention by the watchdog.

STM Gibraltar, whose chief executive was arrested in Gibraltar last year and then released, had been appealing the decision by the Gibraltar Financial Services Commission to appoint inspectors to review “aspects” of the businesses, STM said.

However, STM Group Plc said this week that its Gibraltar business had agreed a “collaborative” way forward with the GFSC for a third-party review (known as a Skilled Person Review) to take place under Section 7 of the Financial Services (Information Gathering and Co-operation) Act 2013, on “certain aspects of the various businesses.”

Because of this an appeal hearing, previously scheduled for 22 January, will no longer take place.

The review will cover the effectiveness and oversight of the companies’ internal compliance function, corporate governance and controls, and an assessment of any potential conflicts of interest arising across the business.

In addition, the review will also cover specific areas of the pensions and life assurance business relating to take-on and monitoring procedures for intermediaries, clients and investments advised by intermediaries. The third party that will carry out the review (equivalent to a Section 166 report under UK legislation) will be Deloitte.

It is expected that the review will be finalised by 31 March and will include recommendations, if appropriate. The report is to be provided jointly to the GFSC and STM. STM declined to comment on the cost of the review.

STM says that despite costs incurred to date and expected costs to be incurred, its trading subsidiaries have not experienced any adverse effects to trading as a result of the probe.  The company expects to announce a trading statement shortly and to make further announcements once the review has been concluded.

Alan Kentish, CEO of STM Group Plc, said: “It is pleasing that the Gibraltar subsidiaries have been able to come to a workable solution with the Gibraltar regulator, rather than pursuing their case through the courts which, at the end of the day, is in neither party’s interest. We look forward to working with Deloitte and the GFSC.”

STM Group’s board has previously voiced its support for chief executive Alan Kentish last year following his arrest in Gibraltar over allegations related to a tax dispute and alleged failure to disclose the proceeds of crime. In October STM said that on Thursday 19 October Mr Kentish was arrested by the Royal Gibraltar Police on an allegation of failure to disclose under the Proceeds of Crime Act 2015. The arrest came approximately two years after STM itself filed two Suspicious Activity Reports to the Royal Gibraltar Police during a tax dispute with a client.

STM, which owns London & Colonial, has said previously that it is considering its long term future in Gibraltar but that no final decision had been made.

More in this category: « Financial Planner fights back against robo-advice Chartered Planner’s new adviser directory axes charges for 2018 »
back to top