Register for Financial Planning Today website for FREE to view more stories and get our daily newsletters. Click on 2 stories to see Registration pop up.
Monday, 26 March 2018 11:21 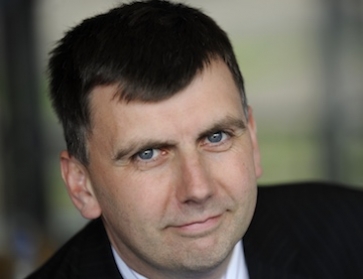 New research has revealed that nearly 3 in 10 people who have taken money out of pensions since the freedoms have stashed the money in a savings account.

There are signs of some ‘worrying’ consumer behaviour following the introduction of the Pension Freedoms in 2015, according to new research.

Headline findings include nearly one in five people (19%) withdrawing cash due to concern over the regulations changing in future and 43% of those polled using the freedoms to take some cash just to have more ‘spending money.’ Some 36% said they needed to use the money for more urgent spending.

The data, released by annuity and retirement product specialist Retirement Advantage, found that 29% withdrew the money to simply put into savings accounts.

Andrew Tully, pensions technical director at Retirement Advantage, said: “A picture is emerging of significant taxable cash sums being withdrawn under the pension freedom rules, driven by desire and necessity.

“More worrying is the significant number of people telling us they are taking the cash because of a concern that the regulations will change in the future.

“Taking money out of a tax advantaged pensions environment to put the money in a savings account is rarely a great idea.

“But I can understand why people are concerned about moving goal-posts as pensions have been a political football for many years.” 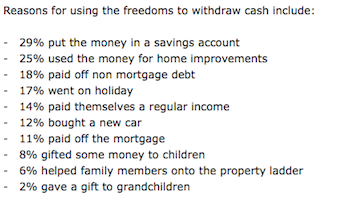 He added, however: “The pension freedoms are clearly popular with customers. We are seeing more people flexibly access their pension savings, and often before planned retirement age.

“DB transfers are also increasingly popular as people look for extra flexibility from their savings.

“However, with freedom and choice comes a whole new level of complexity to catch out the unwary. Cash is king, and Government coffers continue to benefit from the additional up-front tax take.

“More people are going it alone with DIY drawdown, rather than seek professional financial advice, while scammers and conmen continue to prey on the market.”

Recent HMRC data showed that £6.54bn was withdrawn in taxable cash payments from pensions last year, up almost £1bn on the previous year.

More in this category: « FCA warning over Money Saving Expert clone FCA may ban contingent charging on DB transfers »
back to top