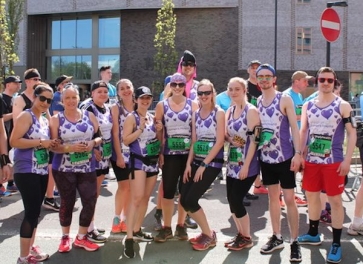 A team of enthusiastic runners from Midlands-based Financial Planning firm AFH raised more than £3,000 over the Bank Holiday weekend for a women’s hospital charity.

The firm’s 11 runners set a target of raising £1,000 for Birmingham Women’s Hospital as they took part in the city’s 10k run on Sunday.

Another colleague also had his own page so the total was boosted to more than £3,000.

The runners’ JustGiving page explained why they chose to support the hospital.

It says: “AFH's chosen charity for 2018 is in memory of the wonderful Amy Shimell, who's two younger sisters are employees here at AFH.

“Amy worked at Birmingham Women's Hospital as a nursery nurse on transitional care and the neo-natal unit, she was incredibly passionate about what she did and loved caring for all the babies and family's in her care.

“Birmingham Women's Hospital is also where a lot of our staff have welcomed children and grandchildren into the world.

“It is the closest women's hospital to our head office therefore supporting this charity only ensures a better future for us all.”

AFH’s charity co-ordinator, Jenny Read, who was one of the runners, said: “It was an amazing experience. Despite it being the hottest day of the year - and a few tired muscles! - it was totally worth it.

"We never imagined we’d beat our target three times over.

"It’s a wonderful demonstration of the affection everyone feels for BWH and a great tribute to Amy’s memory.”

More in this category: « 1 in 6 drawdown retirees taking out over 10% a year Sesame Bankhall appoints chief operating officer »
back to top