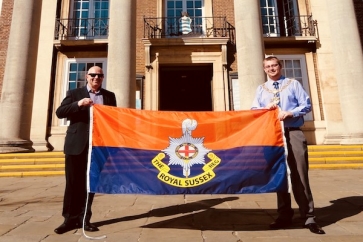 Financial Planning, wealth management and accountancy firm MHA Carpenter Box recently presented the Borough of Worthing with a specially commissioned Royal Sussex Regiment flag to help to commemorate the centenary of the end of the First World War and the Battle of Boar’s Head.

The Worthing and Gatwick based company made the gesture as one of its founding partners served in and survived the war.

The Battle of Boar’s Head was a diversionary attack which took place on 30 June 1916 where men of the Sussex Regiment went ‘over the top’ at Richebourg in the Pas-de-Calais.

The casualty list at the end of the disastrous engagement was 365 men killed, including 22 from Worthing and more than 1,000 wounded, missing or captured.

The flag was flown recently at Worthing Town Hall during a ceremony to bestow the Freedom of the Borough on the Mayor’s Office of the town of Richebourg. 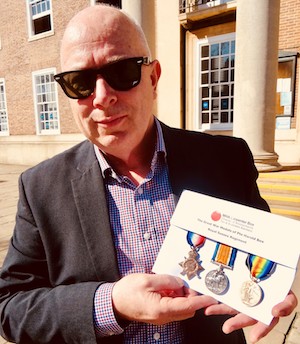 “In his memory and in the memory of those less fortunate souls from his regiment who were killed or maimed during the conflict, we were honoured to cause this very special flag to be made.”

He added: “It was particularly poignant for the flag to play a part in the ceremony to confirm our commitment to the very special relationship between Worthing and Richebourg.

“Such friendships are key to making sure we never forget our links to France with whom we share this important thread of Sussex history.”