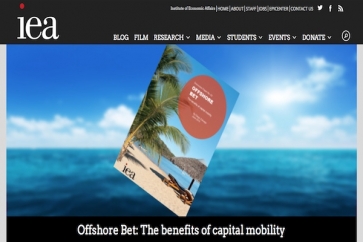 The Institute of Economic Affairs has released a new report which it says “debunks the myths” surrounding tax havens.

The organisation says the the popular account of offshore financial centres (OFCs) as “hotbeds of tax evasion is an outdated caricature that bears little resemblance to how they operate.”

The report outlines what IEA says is the “important economic function they play in a globalised world.”

Their role in facilitating individual and corporate tax planning, which is entirely legal but politically controversial, has come under the spotlight and IEA said the furore had prevented a “measured conversation” about their economic role.

It says the main finding was that: “Clamping down on offshore centres would not raise tax revenue and preserve existing levels of investment.

“Instead, it would change investment flows by politicising investment decisions.”

The IEA produced a myth-busting list to back up its claims refuting what it said were commonly-held, but mistaken, beliefs.

It said OFCs were “not hotbeds of tax evasion”, but by mitigating instances of double and triple taxation, raise aggregate investment.

The report also found their existence was “associated with better economic outcomes in the countries that surround them.”

It also said it was not true that they levy no taxes, with average tax revenue as a share of national income just six percentage points lower than across the OECD.

Key points the IEA highlighted from the report were:

• OFCs have emerged to harness the benefits of a modern financial system – diversification, risk transfers and maturity transformation – when doing business in a world of sovereign nation states.
• The recent growth in the number and size of OFCs can be explained by three developments: an increase in the stock of investable capital, new investment opportunities outside Western Europe and North America, and, crucially, the growth of tax and regulatory intervention by governments.
• As more investment capital is allocated across a diverse range of jurisdictions from investors around the world, the potential for multiple taxation increases. The role of OFCs in eliminating excessive taxation has a positive impact on investment returns which compounds over time.
• Undermining the existence of OFCs would harm investment, economic growth and international capital flows, while the promised benefits from intervention are unlikely to materialise.

Jamie Whyte, director of research at the IEA, said: “Offshore financial centres are a vital part of the modern global economy.

“Clamping down on them would not raise tax revenue, but see investment flows being shaped less by investment opportunities and more by political factors.

“Too often the debate around ‘tax havens’ generates more heat than light.

“It’s time for a rational debate around tax policies.”