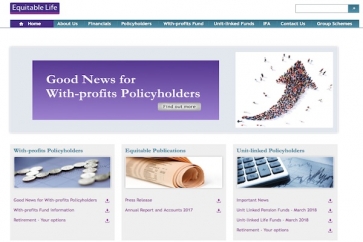 Equitable Life has entered into an agreement to transfer the society and its policies to Reliance Life - part of the LCCG Group - for £1.8bn.

The firm expects to be able to increase the current 35% capital distribution on with profits policies to between 60% and 70%, the extent of the increase made possible by the transfer to Reliance Life.

Equitable Life Assurance Society was established in 1762 and claimed to be world's oldest mutual insurer. It closed to new business in December 2000 after hitting the financial buffers and coming close to collapse.

In its heyday the company had 1.5m policyholders and some £26 billion under management. Many policyholders lost up to half their pension funds after the company was forced to close to new business when its liabilities outweighed assets. Campaigners have fought for compensation ever since despite a government compensation scheme which provided a modest return of cash.

For with profits fund values to be enhanced under the closure plan, eligible policyholders will be asked to vote in favour of removing policy guarantees as well as on the arrangements to transfer to Reliance Life.

Voting is expected to take place in mid-2019 and, with the approval of the High Court, the enhancement to with profits policy values would take place towards the end of 2019.

He said they, “now stand to pick up a nice bonus as the with-profits fund and Equitable Life shuts up shop for good.”

He added: “There’s still a bit of a wait, but the uplift is so substantial it’s well worth hanging on for.”

Hargreaves Lansdown estimated the average windfall for policyholders would be £6,900.

Chris Wiscarson, Equitable Life chief executive, said: “When the Equitable closed to new business in 2000, it was inevitable that at some point the society had to come to an end.

“The benefit of bringing Equitable to an end sooner rather than later is that we can capture for with profits policyholders the near record high values of the investments backing their policies.”

Chairman Ian Brimecome added: “While it will be sad to bring an end to the oldest mutual assurer in the world, the potential to enhance with profits policy values to the extent made possible by a transfer to Reliance Life is fundamentally helpful in distributing capital to our policyholders as fairly and as soon as possible.

More in this category: « Adviser trust in NS&I at all-time high says report England comes third in pensions 'World Cup' »
back to top