Australia is the best prepared World Cup qualifying country when it comes to retirement planning with England in third place, according to analysis carried out by Scottish Widows of the 32 countries taking part in this year’s World Cup.

As England prepare to take on Tunisia this evening in their opening match, Scottish Widows' research reveals good news for England supporters as England is the third best prepared country in the world for retirement, just after second place Denmark. Australia topped the survey. Tunisia is listed as 30th in the survey.

The research, conducted for Scottish Widows by Development Economics, ranked the design and sustainability of pension systems in the 32 countries that are participating in the 2018 World Cup football tournament.

Scotland, Northern Ireland and Wales are not covered by the research as their football teams failed to get to the World Cup this time but with similar retirement planning systems to England their nations could have done well in the research.

Scottish Widows put each qualifying team through what it called a ‘tournament process’ with the country placing higher in the index receiving a 1-0 win against its opposition.

England came top of Group G with maximum points and faced rivals Germany in the quarter final. The Three Lions got the better of the current champions, says Widows, beating them in a World Cup football tournament match for the first time since 1966.

The index was created by ranking each country against 10 categories, including employee and employer contribution rates; proportion of over 65s receiving a pension; population growth statistics and international economic competitiveness. 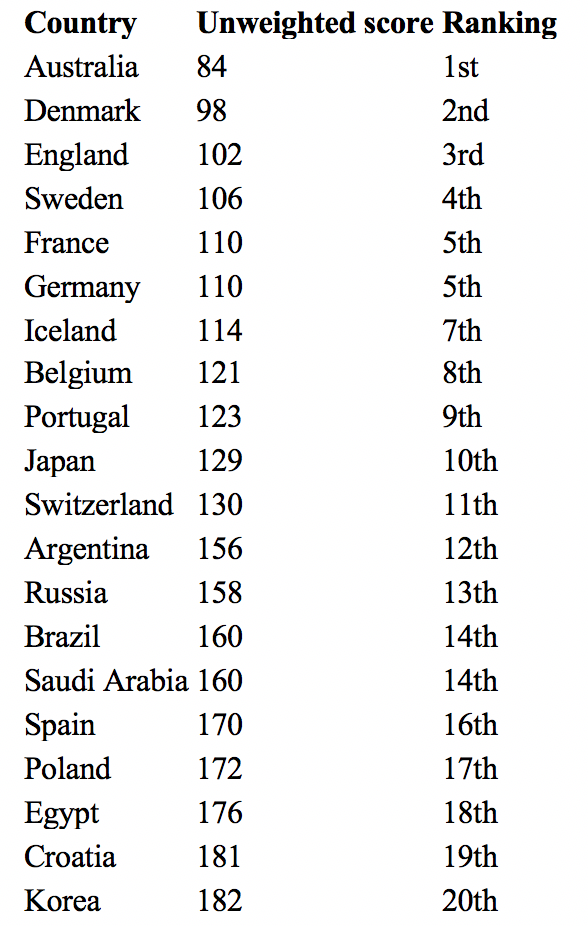 Robert Cochran, retirement expert at Scottish Widows, said: “We had a lot of fun creating this index and seeing how each country performed through the tournament process. There was a serious point behind this exercise, however, and that was to see how public pension systems perform around the world.

“There’s a great deal we can learn from how others are preparing for retirement. Our winner Australia, for example, has had an auto-enrolment policy for 25 years - a journey the UK is currently only six years into. It takes time for these policies to have their desired effect but the impact is clear: today, Australians are among the best funded for retirement in the world.”

He added: “The results of the Pensions World Cup supports our call to scrap the £10,000 earnings threshold and make auto-enrolment inclusive for more workers. We’re also calling on the government to reduce the age at which workers are auto-enrolled from 22 to 18, more quickly than it has proposed.”

This month Scottish Widows released its 14th annual Retirement Report and found savings levels have stagnated across the UK.

More in this category: « Reliance Life buys rump of Equitable Life for £1.8bn Virgin Money bought in £1.7bn takeover deal »
back to top