Register for Financial Planning Today website for FREE to view more stories and get our daily newsletters. Click on 2 stories to see Registration pop up.
Wednesday, 18 July 2018 11:12

CPIH stays at 2.3% despite predictions of a rise 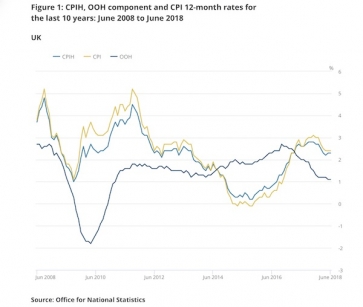 The Consumer Prices Index including owner occupiers’ housing costs (CPIH) 12-month inflation rate was 2.3% in June 2018, unchanged from May 2018 despite expectations of a rise.

CPI inflation, the mostly quoted index, stayed the same too at 2.4% during June as increases in transport costs, mainly petrol and diesel costs, were dampened by downward pressure from clothing and footwear prices, says ONS.

Petrol prices rose by 2.7 pence per litre between May and June 2018 to stand at an average of 128 pence per litre in June, the highest average price since September 2014.

There were falls in prices for clothing and games, toys and hobbies.

The downward effect came mainly from clothing and footwear, where prices of clothing fell by 2.3% between May and June this year compared with a fall of 1.1% between the same two months a year ago. Prices usually fall between May and June, says ONS, as the summer sales season begins, but the fall in 2018 is the largest since 2012. The effect came mainly from men’s clothing.

Sarah Coles, personal finance analyst, Hargreaves Lansdown, said savers would be buoyed by the inflation news. The holding of inflation at 2.4% - surprising forecasters - meant that there are more than 20 standard savings accounts that offer interest of more than 2.4% in the current market, she said.

She said: “This is good news for savers, who were braced for the worst. It also comes on the back of a positive few weeks for the savings market, because the end of cheap government borrowing has finally started to feed through into better savings rates: the average rate in all the fixed rate bond markets is at its highest point in two years.