Register for Financial Planning Today website to get our daily newsletters. Click on 2 stories to see the Registration pop up.
Thursday, 26 July 2018 11:19

Appeal to trace on the run £700k ‘boiler room’ fraudster 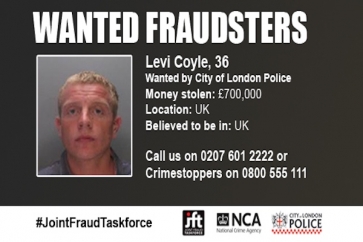 Fraud Squad detectives and other agencies have launched an appeal to find a convicted boiler room fraudster who skipped court and is still at large.

Levi John Coyle, 38, of Colchester, Essex, is wanted by the City of London Police for orchestrating a boiler room fraud for which he was found guilty after failing to appear at court.

In September 2013 a jury at the Old Bailey found Mr Coyle guilty of selling fake shares and defrauding investors out of £700,000 between 2009 and 2010 whilst he claimed to be a broker.

During this time he cold-called victims to offer stock market shares at discounted prices or for sought-after shares that were not at the time available to the general public to buy.

The transactions were fraudulent and Coyle was sentenced in his absence to six years imprisonment for conspiracy to defraud, fraud by false representation and money laundering.

The appeal to trace the wanted criminal came as part of a widespread call this morning, from the Joint Fraud Taskforce, for help from the public in rounding up a host of fraudsters who wanted for a variety of deception offences.

Mr Coyle is subject of a bench warrant for his arrest and his image has been circulated to UK enforcement agencies in a bid to trace his whereabouts.

Joseph Ford, of the City of London Police Fraud Investigation Team, said “We are calling upon the public for their assistance in locating Coyle.

“Coyle must accept the consequences of his crimes, face the courts and begin his jail term handed to him in his absence.”

City of London Police Commissioner Ian Dyson QPM said: “Law enforcement, Government, businesses, and the public working together is one of the keys to combating fraud and bringing criminals to justice.

“The Joint Fraud Taskforce is key to this and brings an urgency and clarity to the UK’s response to fraud, and enhances our efforts to protect the public and businesses across the UK.

“I would urge anyone who has information on the wanted fraudsters to call officers as these people will continue to commit fraud across the globe that cause misery to so many worldwide.”

More in this category: « Disposable income of retirees grows fastest PIMFA warns on consequences of ‘no deal’ Brexit   »
back to top