Register for Financial Planning Today website for FREE to view more stories and get our daily newsletters. Click on 2 stories to see Registration pop up.
Wednesday, 15 August 2018 09:00 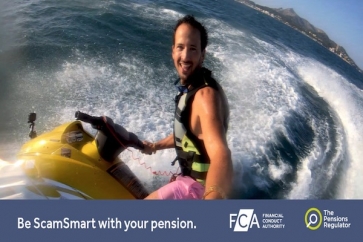 As the joint FCA/TPR ScamSmart campaign kicked off yesterday the regulator posted a tweet of a would-be scammer living the high-life on a jet-ski.

The high-profile campaign, which will also include TV spots, saw a tweet yesterday from the FCA with the picture of a man speeding through the surf in clear blue waters, with the caption: “Don’t let a scammer enjoy your retirement.”

There was also a link to the new ScamSmart webpage, which provides anti-scam advice.

The site says: “Scammers usually contact people out of the blue via phone, email or text, or even advertise online. Or they may be introduced to you by a friend or family member who is also unknowingly being scammed.

“Scammers will make false claims to gain your trust. For example:

“Scammers design attractive offers to persuade you to transfer your pension pot to them (or to release funds from it).

It is then often invested in unusual and high-risk investments like overseas property, renewable energy bonds, forestry,

It goes on to point out that fraudsters may offer a number of things, including:

More in this category: « Backing for joint FCA and TPR anti-pension scam campaign New execs appointed to the Single Financial Guidance Body »
back to top