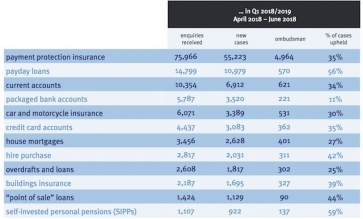 The Financial Ombudsman Scheme has reported a sharp rise in the number of new SIPPs cases in 2018 and is upholding an increasing number of complaints.

The  number of complaints upheld by the Ombudsman also rose sharply in the quarter from 50% to 59%, well above the average FOS ‘complaints upheld’ rate of 35% across all products.

Data so far this year suggests the number of SIPP complaints in 2018 will far exceed 2017 when 2,051 new SIPP cases were taken on by the FOS.

Despite the increases, the number of SIPP complaints still forms only a small part of the overall FOS workload. During the quarter the FOS received a total of 107,000 complaints across all categories with more than half related to PPI. In addition, 21% of all complaints were about payday loans.

FOS data shows a rise in a number of areas, including a jump in new complaints about investment ISAs from 266 to 418 with complaints upheld in this area rising from 33% to 45%. Cash ISA complaints also rose.

Today the FOS also urged the banks to treat victims of frauds and scams more fairly as it emerged that banks only pay out in 25% of scam cases.