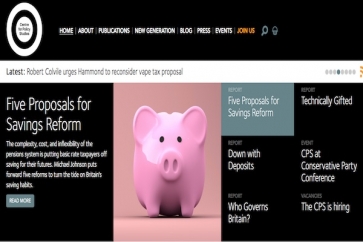 The time has come to reform pensions tax relief to encourage more to save.

That is the view of Centre for Policy Studies, a public policy think tank which advocates free markets.

The organisation says because Britain’s household savings ratio has “plummeted to 4.9%, the lowest since records began in 1963”, it was now time for a change to boost savings.

The think tank also said reform was needed because the top 1% of earners were receiving double the pensions tax relief of half the working population.

It said the “complexity, cost, and inflexibility” of the pensions system, combined with “widespread distrust of the pensions industry,” was putting basic rate taxpayers off saving for their futures with young people, so-called Generation X and Y, “increasingly disengaged.”

Centre for policy Studies contributor Michael Johnson has written a report on the issue.

Mr Johnson, who trained with JP Morgan in New York, worked in investment banking for 21 years and ran former Prime Minister David Cameron’s Economic Competitiveness Policy Group, launched his ‘Five Proposals to Simplify Saving’ this week, as a response to the Government’s recent announcement of a review into pensions tax relief.

The report set out five main proposals to broaden the country’s savings base and save the Treasury money:

1. Abolish tax relief on pensions and replacing it with bonuses on individual and employer retirement savings contributions. Crucially, the bonuses would be disconnected from tax-paying status.
2. Introduce a generous cap on the total bonus any individual can receive in one year.
3. Reform auto-enrolment to scrap the minimum earnings threshold.
4. Replace NICs rebates with bonuses on employer’s contributions, paid directly into the employee’s personal accounts.
5. Introduce a Workplace ISA to house employers’ contributions, locked in until age 60.

Mr Johnson claimed the reforms he has outlined would particularly benefit low-income earners who save passively, where today they gain least from tax-related incentives.

He also said they would also boost gender equality and tackle the “net pay” problem and “dramatically simplify the savings landscape for people in all income brackets.”

Robert Colvile, director of the Centre for Policy Studies, said: “The pensions savings landscape is complex and many people are put off from adequately preparing for their retirement.

“The proposals put forward in this paper would incentivise mass savings and save the Treasury an estimated £10bn a year.

“It is vital that reforms are made so that people can access financial products which suit their needs today, and in the future.”

Mr Johnson said: “The current system of tax relief is incomprehensible to the general public.

“Tax relief costs the Government billions each year but 68% of that flows to higher and additional rate taxpayers who do not need such a large incentive to save.

“The Government should focus its reforms on proposals which do the most towards creating a broader savings base - such as replacing tax relief with bonuses on pensions contributions.”