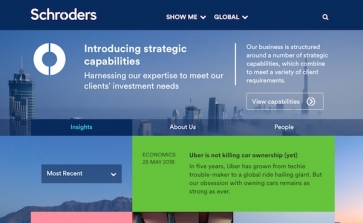 Schroders this morning confirmed it was in discussion with Lloyds Banking Group about a potential £13bn investment management joint venture.

In a statement to the London Stock Exchange, Schroders said: “Following recent media speculation, Schroders plc confirms that it is in discussions with Lloyds Banking Group plc with a view to working closely together in parts of the wealth sector.

“Discussions are ongoing and there can be no certainty that these discussions will lead to any formal arrangement being entered into. A further announcement will be made when appropriate.”

Schroders was responding to reports from Sky News which says it believes Lloyds Banking Group is “finalising the details”‎ of a partnership prior to an announcement by the two companies later this month.

According to the report, the collaboration would see Lloyds owning 50.1%‎ of the new joint venture, with Schroders owning the rest.

Giving Scroders access to the “mass affluent” market is believed to be one of the drivers of the deal.

If the deal goes through it may see Schroders taking on a £109bn investment management contract from Lloyds-owned Scottish Widows.

This investment management contract is currently held by Standard Life Aberdeen‎ but the ending of the contract was announced by Lloyds earlier this year due to potential conflicts of interest.  It was suggested Lloyds was unhappy with the £11bn merger of Aberdeen Asset Management with Standard Life.

The third part of the Lloyds-Schroders tie-up would involve Cazenove Capital, the upmarket wealth manager, says Sky News which speculates that Lloyds would acquire a 19.9% stake in the division as part of the overall agreement, although Cazenove Capital would not be directly involved in the new wealth join venture.

Both the Lloyds and Schroders boards are said to have agreed to the deals, although it has not yet been formally agreed, says Sky News.