Register for Financial Planning Today website for FREE to view more stories and get our daily newsletters. Click on 2 stories to see Registration pop up.
Monday, 15 October 2018 09:05 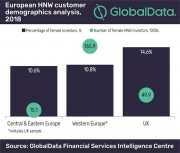 Almost 15% of UK HNW investors are women, equivalent to 50,000 individuals and the largest female HNW population in Europe, according to new research.

The UK is one of the few European markets in which women are a major segment forming 1 in 6 of all HNW investors, says GlobalData, a data and analytics company.

The UK has more female millionaires than in “all the nations of Central and Eastern Europe combined” - says GlobalData - and this demographic segment represents a growing opportunity for wealth managers to target a sector that is currently a poorly served segment.

The company’s report, ‘Wealth in the UK: HNW Investors 2018’, reveals that while it is already a mature wealth market, the UK has room for growth with expansion of intergenerational wealth transfer  expected and a gap between inheritance and tax planning services and demand.

Global Data says that propositions targeted at wealthy women can “prove to be a competitive advantage.”

However so far, globally the industry as a whole has “failed to connect” with women. Global Data say that in the UK specifically this is complicated by the fact that many wealthy women are busy executives, either entrepreneurs or high-flying employees.

Time constraints are a key problem for this demographic, something they share with male colleagues however, whereas British men can rely on their wealth managers to understand their needs to build up trust and facilitate a convenient relationship “wealthy women do not have that luxury.”

Bartosz Golba, head of content, wealth management at GlobalData, said: ‘‘Wealth managers that can connect with female investors on concerns such as dependents, financial health, and risk management will have a competitive edge in this large and growing segment.’’

“Being able to differentiate from other providers in the UK’s well-developed wealth management market is key. 55% of wealth managers surveyed by GlobalData agree that intergenerational transfers will be a big source of new business in the coming years. Hence inheritance planning will continue to be of importance, but competitors can stand out from the crowd by adding tax advice to the mix.

He added: ‘‘The industry also has to consider alternatives for discretionary asset management services traditionally favoured by HNW clients. Demand is increasing for both advisory mandates and automated solutions like robo-advisers – and UK wealth managers are worried. Those that can adapt to a hybrid model will gain market share.”