Register for Financial Planning Today website to get our daily newsletters. Click on 2 stories to see the Registration pop up.
Wednesday, 31 October 2018 08:54 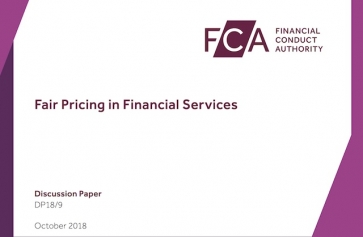 The Financial Conduct Authority has confirmed details of its probe into ‘fair pricing’ in financial services alongside a market study into how general insurance firms charge customers.

The FCA says it has been “concerned” that general insurance pricing has the potential to cause “harm” to consumers, particularly the vulnerable. It will also look at pricing transparency around renewal time.

The market study into general insurance will spur a wider review of fair pricing throughout financial services.

The FCA said it was launching “a public debate on the fairness of certain pricing practices in financial services.

The focus will be on:

The watchdog says that these pricing practices can potentially disadvantage some consumers significantly, in particular the “most vulnerable and least resilient consumers.”

The general insurance market study will look at conduct by firms, provide a review of general insurance pricing practices and spur a “wider discussion paper” on fairness of pricing in financial services, said the FCA. General insurance generates over £78 billion in premiums for UK insurers.

Andrew Bailey, the FCA’s chief executive, said: “Our initial work has identified a number of areas of potential consumer harm. We want to make sure that general insurance markets deliver competitive and fair prices for all consumers.

“This market study will help us examine the outcomes from general insurance pricing practices and inform how, if necessary, we should intervene to improve the market. If change is needed to make the market work well for consumers, we will consider all possible remedies to achieve this.”

The FCA aims to publish an interim market study report in summer 2019 setting out preliminary conclusions including possible potential remedies. It aims to publish its final report and possible consultation on proposed remedies by the end of 2019.

The FCA is seeking submissions to the discussion paper on fair pricing by 31 January.

Alongside the FCA’s work on general insurance pricing, it has reiterated that it is working closely with the Competition and Markets Authority as it investigates the Citizens Advice ‘super-complaint’ on excessive prices for disengaged customers.