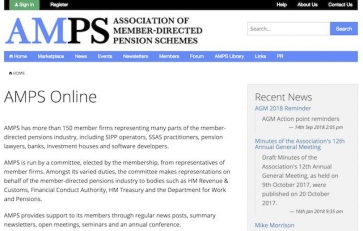 The SIPP providers body AMPS (Association of Member-Directed Pension Schemes) has urged members to learn lessons from the implications of the recent Berkeley Burke SIPP court ruling but says the case is “no game changer.”

The FCA has written to SIPP firms to reiterate their regulatory commitments following the judgement in the Berkeley Burke case.

A ‘Dear CEO’ letter, from FCA chief executive Andrew Bailey to SIPP firm chief executives warned of the “potential implications” for other firms as a result of the ruling against Berkeley Burke.

The High Court rejected Berkeley Burke's claim against a Financial Ombudsman Service (FOS) decision from 2014. The FOS ruled that Berkeley Burke had to compensate a client after it failed to carry out appropriate due diligence on an investment.

The case revolved in part around the underlying responsibility SIPP providers must take for investments included in a SIPP wrapper or whether the responsibility rested solely with advisers.

Following Berkeley Burke’s claim for a judicial review against a decision by the Financial Ombudsman Service being dismissed and the release of a Dear CEO letter from the FCA, AMPS spokesperson said the judgment needed to be noted and acted on but it did not change any fundamentals for the SIPP sector.

The AMPS spokesman said: “It is clearly positive that there is no implication that SIPP providers need to give advice to their members or that they should be checking that the investment is suitable for the particular member.

“Knowing the client and what is suitable for them clearly falls to the adviser, if there is one. However, the ruling does make it clear that it is for the SIPP provider to ensure that the investment itself is suitable for the pension scheme.

“The majority of SIPP providers take the due diligence of investments incredibly seriously but care needs to be taken because as we can see from this ruling it is difficult to establish if what has been done is going to be sufficient. Each case will need to be assessed on its merits but we don’t feel that this ruling is a game changer for the majority of our members.

“With regards to the Dear CEO letter from the FCA issued today, SIPP providers should be well capitalised due to the changes in the capital adequacy requirements brought in during September 2016 and should have measures in place to remain compliant.”

More in this category: « 8 in 10 Junior ISA investors keep kids ‘in dark’ over savings Govt orders 2 firms claiming to help scam victims to close »
back to top