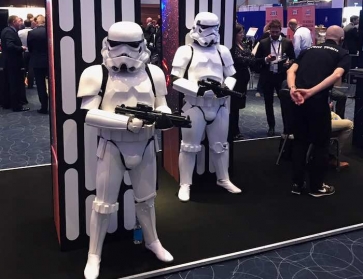 Storm Troopers, Chewbacca and a host of Star Wars-themed characters appeared at the two events.

Both events include a large exhibition area and speakers from a wide variety of backgrounds including Financial Planning, investment, pensions, politics, economics and science.

PFS chief executive Keith Richards said the events had enjoyed “a real buzz’ with attendees enjoying the mix of fun and serious professional and technical sessions along with motivational speakers including female astronaut Helen Sharman.

Many stands were themed on Star Wars or space exploration and many of the speakers managed to weave space exploration themes into their talks. Mr Richards, for example, was escorted on stage by Storm Troopers when he addressed the audience, receiving loud applause.

He told Financial Planning Today: “The theme of Star Wars was chosen because it underlines the growth of Financial Planning as a force for good. The industry has changed into a profession with the ability to change people’s lives and we should celebrate that.”

“The theme has been very well received by everyone with lots of people enjoying the fun and the serious sessions alongside that.

“Across the two events we’ve attracted just under 1,500 members all of whom seemed to value the content and enjoyed being able to network with like minded professionals.

“The highlights for me are always the positive feedback we get from members attending and we have had some excellent comments this year.”

Mr Richards said the popular PFS Financial Planning Festival, which took place at the NEC last year and attracted 3,500 attendees, may be repeated in future due to demand but the PFS would also be expanding its PowerLive Financial Planning events and running other events next year.

•  The annual PFS Awards dinner took place last night. Among the winners were:

• Chartered Financial Planner of the Year: Natalie Wright of Mazars

• Paraplanner of the Year Jade Mountford.

More in this category: « FCA prepares for possibility of ‘no deal’ Brexit Chartered Planner launches weekly retirement podcast »
back to top