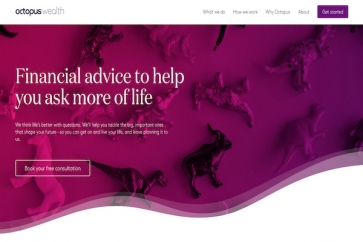 Fast-growing Octopus has revealed it is developing a new wealth management business as it looks to bring financial advice to more people.

The firm says Octopus Wealth has been set up to “explore ways of delivering advice using new technology that it’s building in house, to complement traditional face-to-face advice.”

According to research recently conducted to inform the Financial Advice Market Review, more than nine out of 10 Britons do not currently consult an adviser.

The number of financial advisers in the UK continues to hover at around 25,000, serving an adult population of over 51 million – that equates to one adviser for every 2,000 adults.

Octopus Wealth aims to help reduce what it calls the UK’s “advice gap”, by encouraging more people to engage with financial services and to realise the positive difference of financial advice.

The focus will be on serving younger, new-to-advice clients.

Simon Rogerson, CEO and co-founder of Octopus Group, said: “We have been massive champions of financial advice for the nearly 20 years that we have been in business.

“We support thousands of advisers across the country every day, with smart investments that solve real problems for their clients.

“And we always will.

“It’s no secret, though, that there aren’t enough advisers in the UK.

“Too many people are going without the smart advice that could help transform their lives for the better, and we think that should change.

“That’s the rationale behind our new business, which will use technology to focus on people who perhaps haven’t considered the need for financial advice before, but who could really benefit.”

The business, which is run out of a separate office, was said to be “in very early stages of development.”

It currently has two advisers and a small number of clients and is focusing on testing its proposition and building the technology.

It will offer restricted advice using a range of products and services from within the Octopus Group and beyond as it looks to deliver on each client’s Financial Plans.

As part of its toolkit, Octopus Wealth is developing new fact-find technology designed to make the client on-boarding process as simple and intuitive as possible.

Once tested the team would look to offer its tech solutions and other learnings that they think would be valuable to advisers who might want to incorporate it into their businesses.

Octopus Wealth is the latest business launched by Octopus Group following the creation of its fintech innovation arm two years ago.

Its investment in tech has seen it successfully develop a number of  solutions to support financial advisers – including Octopus Choice, the property-backed lending product, and Octopus Cash, the cash management platform.