Register for Financial Planning Today website for FREE to view more stories and get our daily newsletters. Click on 2 stories to see Registration pop up.
Friday, 21 December 2018 11:39 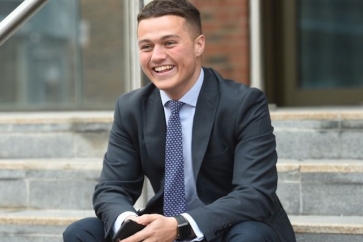 A 21-year-old has been appointed a PFS Fellow and was said by his firm to be the youngest ever to be awarded the accolade.

Manchester-based Jacob Hartley gained the title after three and a half years as a trainee planner at LIFT-Financial’s academy.

The recognition added to LIFT’s relationship with the PFS, with the firm twice previously being named PFS Chartered Financial Planners of the year.

“With LIFT-Academy we are passing on the benefits of our high professional standards to members of the Academy program, which Jacob joined in July 2015.

“On the journey to Fellowship he has so far sat 19 exams, the highlight of which was passing two Advanced Diploma exams in each of two sittings during 2018.

“As well as the high-level of dedication and commitment Jacob has shown to achieving his goal, he credits the support he has received from us during his time here and the environment we have created for young high-achievers to flourish in.

“Jacob hopes that he can be an inspiration to other young people who want to pursue an alternative to the traditional route of full-time university.”

Mr Hartley said: “I’m extremely proud of this achievement as it’s a true reflection of all the hard work I’ve put into study over the last three years, at times sacrificing some of the normal things someone of my age would be doing with their spare time.

“LIFT-Financial strive for high standards in terms of professional qualifications and that was a great motivator for me.

“It is often thought that if you don’t go to university your career prospects will be limited, but I think my journey so far shows that full-time university is not the only path for a successful future.

“It’s tough juggling 19 exams with a full-time job, but I wouldn’t have done it any other way.”

Keith Richards, chief executive of the PFS, said: “On behalf of everyone at the PFS, we congratulate Jacob on becoming a Fellow at such a young age.

“Jacob’s achievement demonstrates an outstanding commitment to attaining professional qualifications and is the gold standard in technical competence.

“We look forward to following his career in our profession closely.”

Mr Holden added: “We see a very bright future for Jacob and will continue to support him as works towards achieving Chartered status in the future.”

Mr Hartley will be attending his graduation ceremony on 26 April in the Great Hall of the Worshipful Company of Insurers, in the City of London.