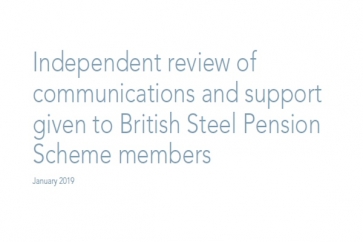 A new report into the BSPS debacle has heavily criticised regulators including the FCA and TPR.

The independent report, authored by former Money Advice Service CEO Caroline Rookes, called for a review of regulators’ website content and demanded the FCA and SFGB (Single Finance Guidance Body) review their registers to make them “fit for purpose.”

The watchdogs faced censure for failing to ensure steelworkers had access to up-to-date and impartial information before making important decisions over their pensions.

One of Ms Rookes’ recommendations was: “TPR, the FCA and the SFGB review their website content and work together to develop guidance for members specifically and clearly aimed at transfers out of DB schemes explaining the risks and how to seek help.

“Trustees should be expected, via TPR codes and guidance, to provide appropriate support to members who are considering a cash transfer.

“The guide might build on the industry code of practice for incentive exercises.”

And, on registers, Ms Rookes wrote: “SFGB and FCA should review their adviser directories/registers and ensure they are fit for purpose.

“They should consider how to deal with the problem of advisers who have been the subject of compliance issues in the past.

“Members of DB schemes should be directed to the SFGB adviser directory in the first instance.

“TPR should explore if there is a way to allow trustees or the trade unions to identify a panel of financial advice firms that members can select from.”

Broadly the report called for better communication and cooperation between the regulators.

Steve Webb, director of policy at Royal London, said: “Thousands of steel workers have a right to feel let down by those whose jobs were to protect their interests.

“The trustees of the pension scheme failed to make sure that workers had access to high quality impartial advice when making decisions about their pensions.

“And regulators were slow to act when it became clear that things were going wrong.

“Deciding whether or not to transfer a pension is a complex decision and depends on each individual’s personal circumstances.

“Workers had a right to expect that people who understand the complexities of pensions would have used their expertise to help them make the right decisions, yet those who were in a position to act let them down’.

In a joint statement, the FCA, TPR and SFGB, said: “We thank Caroline Rookes for producing her independent review which will ensure that important lessons are learned from the experiences of the members of the British Steel Pension Scheme.

“We will now consider how we will act on the report’s recommendations including where appropriate having discussions with the Department for Work and Pensions (DWP).

“We are already working closely together to provide an increased level of support to trustees and scheme members where there is uncertainty around the future of a DB pension scheme.

“We are also today publishing a joint protocol to ensure we work in a co-ordinated way to support members of pension schemes.

“Our joint working also includes providing letters for trustees to send members alerting them to the risks of transferring out of DB pension schemes and giving practical information.

“The letter has already been sent to 24 pension schemes.”

Lesley Titcomb, chief executive of TPR, added: “We are grateful to Caroline Rookes for identifying a number of useful themes in her review which will help ensure pension savers are less likely to make transfer choices which are not in their best interests.

“We will now work together with trustees and the Government so that we can all address the review’s recommendations.

“By working closely with the FCA, TPAS and now the Single Financial Guidance Body, we are determined to help minimise a repeat of the difficult circumstances in which some members of the British Steel Pension Scheme have found themselves.”

More in this category: « Financial firms in top 100 LGBT-friendly workplaces list Goldman Sachs injects £45m into Nutmeg »
back to top