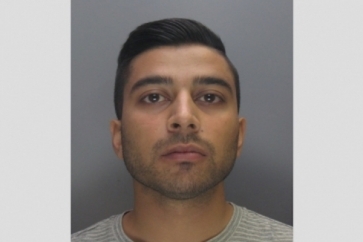 A carbon credit fraudster sentenced to eight years in prison in his absence in January is believed to be now running a business in Dubai and is wanted by police.

Sami Raja, 32, of Grays, Essex, used his criminal gains scammed from mainly elderly investors to fund a luxury lifestyle including an Aston Martin.

He was sentenced in January at Southwark Crown Court, after being found guilty of six counts of conspiracy to defraud and money laundering.

He, along with four others, mis-sold carbon credits to unsuspecting victims through two companies, Harman Royce Ltd and Kendrick Zale Ltd, between January 2012 and August 2013.

Today Financial Planning Today can reveal Mr Raja is believed to have fled to Dubai and is believed to be running a UAE-based business advice and marketing firm.

City of London Police appealed for information on his whereabouts in a statement released to Financial Planning Today this afternoon.

Victims of one of his firms, Harman Royce, would receive telephone calls from ‘brokers’ of the company who, often using fake names, would persuade them to invest in voluntary emission reductions (VERs); a type of carbon credit.

Brokers at Harman Royce sought the contact details for homeowners, aged 50 and above, living in affluent postcodes in order to target their victims.

Evidence from an independent consultant suggests that the real trading price for carbon credits at this time was between 25p and 30p.

The money paid into the Harman Royce bank account was used to pay staff wages and buy luxury items including an Aston Martin worth £33,000 and a £4,000 watch.

Victims reported receiving unsolicited phone calls from ‘brokers’ at Kendrick Zale who used high pressure sales techniques to persuade them to invest in Certified Emission Reductions (CERs); a type of carbon credit, at an inflated price per unit.

In many cases, investors were persuaded to cash in ISAs or sell existing shares.

In September 2013, officers executed a search warrant at the offices and Mr Raja and others were arrested.

Items such as scripts, brochures and sales confirmations were seized.

Between May and August 2013, Kendrick Zale was found to have sold over 300,000 carbon credit units to 28 individual investors.

At the time of sentencing, last month, senior investigating officer Hayley Wade of the City of London Police’s Fraud Squad, said: “The set-up of Kendrick Zale just months after clients of Harman Royce had been defrauded shows the callous nature in which these fraudsters operated.

“Raja cruelly targeted often elderly individuals with the intention of defrauding them of their life savings. He clearly felt no remorse for their actions, closing one company, only to set-up another and commit the same offences.

Today a City of London Police spokeswoman said: “Sami Raja was sentenced in his absence and is currently wanted.

“We believe he is in Dubai. Anyone with information about Raja’s whereabouts should call 101.”