Register for Financial Planning Today website for FREE to view more stories and get our daily newsletters. Click on 2 stories to see Registration pop up.
Friday, 15 February 2019 09:16 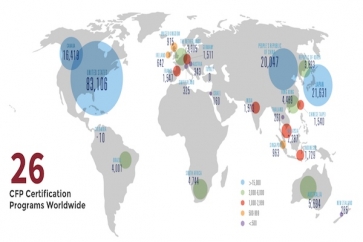 The Financial Planning Standards­ Board (FPSB), owner of the international Certified Financial Planner certification programme outside of the United States, reported another year of growth in 2018, as the total number of CFP professionals worldwide rose to 181,360.

With a net increase of 5,787 CFP professionals over the previous year, FPSB and its global network of affiliate organisations in 26 territories experienced annual growth of 3.3%.

However the picture was less rosy in the UK where the number of CFPs fell from 933 to 915.

The UK maintained its position as 17th on the world list, behind countries such as France, Germany, the Netherlands and Chinese Taipei.

Australia had 5,694 CFP professionals, according to the figures. 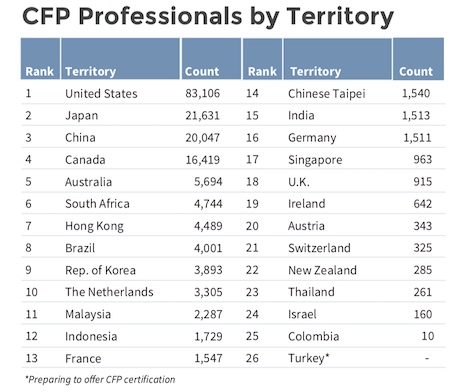 • Japan Association for Financial Planners, offering CFP certification for 27 years, with net growth of 480 for a year-end total of 21,631 CFP professionals.

• FPSB Indonesia, ending the year with 1,729 CFP professionals through a net gain of 225, and a growth rate of 15% over the previous year.

Noel Maye, CEO of FPSB, said: “To establish financial planning as a recognised global profession, FPSB has set itself an ambitious goal to have 250,000 CFP professionals in 40 territories by 2025.

“With a global CFP professional growth rate of 3.3% within FPSB’s 26-territory network, talks underway in several new territories and the rollout of FPSB pathway education and certification programs last year, FPSB is making solid progress in its efforts to increase the public’s access to competent and ethical Financial Planners who work in their clients’ interest.”

CFP Board, FPSB’s member organisation in the United States and the longest running CFP certification programme, had a net growth of 3,071 CFP professionals finishing the year with 83,106 in the US.