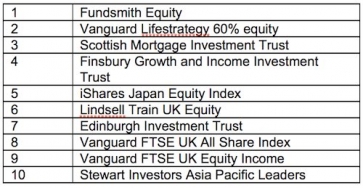 Terry Smith’s popular Fundsmith Equity fund was the most recommended investment by financial advisers in January and February, according to figures from AJ Bell’s platform.

While Fundsmith topped the list, three of the top 10 funds were from Vanguard.

The list also included three investment trusts along with the popular Lindsell Train UK Equity fund and an ETF from iShares.

Most funds were actively managed but four passive funds were also present (see table below).

AJ Bell said there no signs Brexit was deterring investors.

Ryan Hughes, head of active portfolios at AJ Bell, said Terry Smith had continued to maintain popularity on the back of good performance.

He said: “Terry Smith has nurtured a strong following through his clear investment approach and impressive track record so it is no surprise to see his equity fund at the top of the list.  It’s interesting to see four passive funds in the top 10, with advisers clearly conscious of keeping costs under control for their clients.

“Of the six active strategies, three of them are investment trusts, showing that advisers running bespoke portfolios are happy to mix and match funds and trusts in their client portfolios.

“Interestingly, Brexit does not seem to be deterring advisers from allocating to the UK with half of the top 10 most popular investments having a specific UK investment focus. In terms of overseas markets, Japan and Asia more broadly continue to be popular via the iShares Japan Equity tracker and the Stewart Investors Asia Pacific Leaders fund.”

Most recommended investments by advisers via the AJ Bell Investcentre platform during January and February 2019 were:

More in this category: « 360% rise in scam phone calls in 6 months says HMRC Helping a couple left in limbo with decumulation woes »
back to top