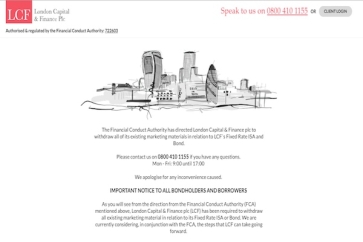 All remaining eligible London Capital & Finance (LCF) bondholders will receive an offer of compensation from the Government’s compensation scheme by 20 April 2022.

The FSCS expects the scheme to open soon.

The FSCS expects compensation payments to begin later this month.

In March LCF investors were given the right to have their case heard in the Court of Appeal after a judge decided not to overturn the FSCS's decision only to compensate a minority of LCF investors.

Bondholders do not need to contact the FSCS to received compensation.

The FSCS also warned LCF bondholders to be wary of any contact promising compensation for a fee as it is likely to be a scam.

Legislation for the Government’s compensation scheme for bondholders of LCF successfully passed through Parliament and received Royal Assent on 20 October.

The Government compensation scheme has its own dedicated web page at www.gov.uk/LCF-compensation-scheme.