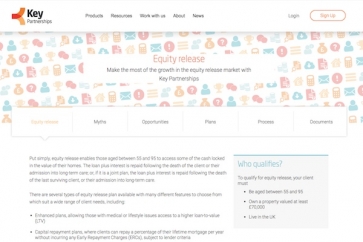 New research has revealed a 30% surge in equity release referrals as a wider range of intermediaries seek advice for their clients on accessing property wealth.

The data, from Key Partnerships, which has helped introducers’ clients release more than £110m this year, showed that the customers it deals with via referral relationships were releasing an average £96,064 which was 12% higher than the market average (£85,373).

While Key Partnerships accepts referrals from a variety of different sources including mortgage brokers and estate agents, the firm says it is seeing growing interest from solicitors, accountants and wealth managers.

Key Partnerships believes the change has been driven by “a wider range of people – including those who may not have spoken to intermediaries in the past – approaching introducers for support with their later life finances.”

Jason Ruse, head of Key Partnerships, said: “The record growth in the equity release market means a wider range of introducers are realising that their clients can benefit from specialist advice on using their property wealth.

“Making use of property wealth in retirement is certainly not deemed to be for the less affluent and we find that people are using it to help manage their retirement finances, gifting monies to their children and grandchildren early and potentially reducing their Inheritance Tax bill.

“The higher than average case sizes and property prices for referral customers reflect the growing  demand from all introducer including solicitors, accountants, wealth managers, networks and mortgage clubs.”