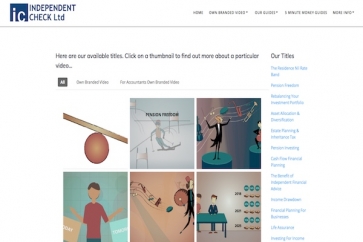 A multimedia firm has created a new video which seeks to explain pension freedoms to clients.

The video, which can be rebranded as advisers’ own for engagement purposes, was described as “a way for adviser firms to share important educational information about subjects generally not well-understand by consumers.”

The creators of the film, Own Branded Videos and directed by Gadget Line Films, say the footage will address regulatory calls for better understanding and engagement which will support consumers in making important pensions and retirement decisions.

David Inglis of Gadget Line Films says “The consumer now looks for video first and, in many cases, will only view a video, as opposed to reading something.

“Recent surveys of consumers and research alongside this leaves no room for doubt, video is already the leading communication medium.

“It is inconceivable to think of a firm in 2019 not using video as a cornerstone of their communication and servicing strategy.

“Yet our own research last year showed that less than a third of all advisers are using video, of any type, in any way.”

He added: “The regulators are pushing hard for better understanding, which in my view translates into firms building an educational experience for their audience alongside their advice process.

“Although this may seem like a regulatory nudge, the value of doing this is way in advance of meeting regulatory policy, as the use of video has many beneficial aspects for firms using them.”

Own Branded Video is a collaboration between the video production team, Gadget Line Films in Bristol, and the distributors, Independent Check in Cardiff, to bring video to the IFA market-place.