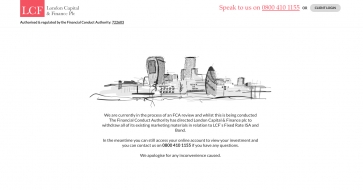 The Financial Services Compensation Scheme has reiterated today that its door is closed to claims against the £236m collapsed mini-bond firm London Capital & Finance - but it could review its stance.

In a chink of light for investors, the compensation body said it could open the door to claims if its own investigation into the way LC&F’s marketed its products revealed that investors were mis-led into thinking they were investing in regulated products.

For the time being, however, claims against the firm are being rejected and will not be considered by the investor compensation body.

London Capital & Finance marketed a failed bond scheme that lost 14,000 bondholders a combined £236m. Many were tempted by the promise of high rates of annual return but were left empty handed when the firm failed. Some lost a significant chunk of their life savings.

LC&F promoted ‘mini-bond’ investments to investors. These were ostensibly to fund property developments. The products were ‘sold’ as investments and some were packaged as ISAs but they were, in effect, loans to developers. Because they were structured as loans and not investments the FSCS says the failure falls outside its jurisdiction.

The Serious Fraud Office is investigating LC&F after it crashed into administration in January and four arrests have been made. The FCA has also announced a probe into its own handling of the affair and public and political pressure to act is growing.

However the FSCS says while its stance has not changed it is “working closely” with administrator Smith & Williamson to “understand more about how the firm carried out its regulated activities.”

The FSCA says that its current understanding is that the firm issued its own mini-bonds to investors on a “non-advised” basis and that these mini-bonds were not transferable securities. It adds that this activity is not a regulated activity under the Regulated Activities Order and, therefore not FSCS protected.

In a statement in its Outlook magazine today the FSCA said: “For this reason, although the firm is insolvent, we are not accepting claims against the firm. Should we determine, however, that there are circumstances that give rise to potentially valid claims, we will begin to accept claims against LCF.

“At this stage it is too early to say which funding class is most likely to be levied if FSCS were to uphold claims against LCF.”

More in this category: « FSCS levy drops by £42m but SIPP claims rising SJP funds under management top £100bn as inflows slow »
back to top