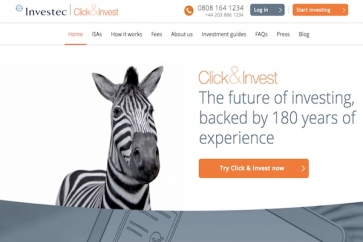 Investec is to close it direct to consumer Click & Invest online arm after operating losses topped a total of £25m over the past two years.

The underlying operating loss at Click & Invest was approximately £12.8m in the last financial year (2018: £13.5m). There was also a £6m write-off of software costs in the current year.

The business was launched two years ago as a direct to consumer operation and last year announced plans to extend into the SIPP sector. However mounting losses and lack of demand have forced Investec to close the operation with immediate effect.

In a statement today the firm said: “Investec Click & Invest launched just under two years ago, and we are extremely proud of the service we have provided and the consistently positive feedback we have received from clients.

“However, the reality has been that the appetite for investment services such as ours remains low and the market itself is growing at a much slower rate than expected.

At the same time, Investec has outlined new operating targets and strategic objectives for the group, which include a focus on improved capital allocation and cost management.

“We fully appreciate that this announcement will be of real sadness to both clients and staff of Investec Click &Invest. Our prime concerns from this point are to minimise disruption for clients and ensure that employees are treated with respect and fairness.”

Client investments will be moved “elsewhere” says the company and clients are being written to today to explain the options.

Consultation for employees will begin shortly.

Despite the problems with Click & Invest the company says it remains committed to “developing its digital initiatives.”