Register for Financial Planning Today website to get our daily newsletters. Click on 2 stories to see the Registration pop up.
Tuesday, 06 August 2019 10:09 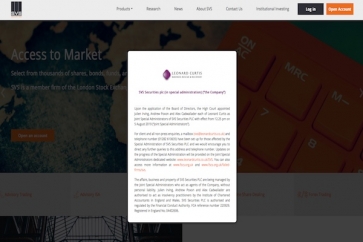 Stockbroker SVS Securities has slumped into administration and FSCS and FCA probes have been launched over “serious concerns” about the firm.

Leonard Curtis was appointed as administrator for the stricken City-based firm and are eyeing a number of options including a sale, the FCA said yesterday.

A statement issued by the regulator read: “Acting on intelligence received about the assets in which SVS invested its clients’ money, we conducted urgent supervisory work and identified serious concerns about the way in which the business was operating.”

The Financial Services Compensation Scheme (FSCS) revealed yesterday that it was investigating “in respect of client money and assets”.

A statement from the FSCS read: “The Special Administrators will carry out an assessment of the client money and assets held by the firm to confirm the current position.

“Following the assessment, the Special Administrators will work to return as much client money and assets to customers as possible as quickly as possible.

“Should the Special Administrators find that SVS does not hold enough client money or assets, then FSCS will cover asset and client money shortfalls – including the costs associated with their distribution back to clients – for eligible customers up to our compensation limit of £85,000.”

The statement added: “|At this stage there is no need for customers to make a claim with FSCS.

“We will provide further updates on our website as more information becomes available.”