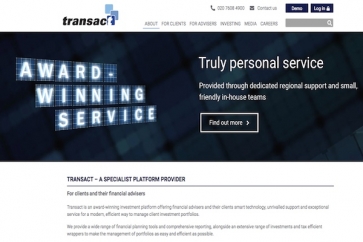 The parent company of Transact, the platform used by many Financial Planners, has been hit with an unexpected £4.3m VAT bill from HMRC which could also see the company having to pay an additional £1.4m a year in VAT.

Transact’s parent, IntegraFin Holdings, says it will likely appeal the decision which could hit profits.

IntegraFin’s share price dropped about 3% on the news from 490p to 475p but has since stabilised.

This week IntegraFin Holdings received notice from HMRC about VAT paid by one of its companies: Australian-based Integrated Application Development Pty Ltd (IAD). HMRC said IAD's membership of a UK VAT group would be terminated with effect from 16 July 2016.

IntegraFin says that the consequence of the exclusion of IAD from the UK VAT group is that the services provided from Australia by IAD would be subject to reverse-charge VAT from 2016 onwards.

IntegraFin says it included IAD in the UK VAT group having taken “specialist advice” prior to its IPO in 2018. It followed that advice to ensure that the inclusion of IAD's branch in the UK VAT Group was in accordance with relevant laws, it said.

It is likely that no sum will be paid while a challenge is mounted but IntegraFin estimates that, while the final figures are uncertain, if the VAT bill has to be paid HMRC's notice states that the VAT due since July 2016 will be approximately £4.3m. It also states that there would be an additional VAT charge of approximately £1.4m annually.

IntegraFin says it does not yet know whether HMRC will charge interest and/or a penalty.

The company has made a statement to the Stock Exchange about the issue and added: “The content of the communication (from HMRC) is not what we were expecting. The company is considering its response in consultation with its advisers.”

More in this category: « Drawdown returns beat annuities since Pension Freedoms Robin Beer to replace retiring Nicol as Brewin CEO »
back to top