More pension savers expect to be 65+ before retiring 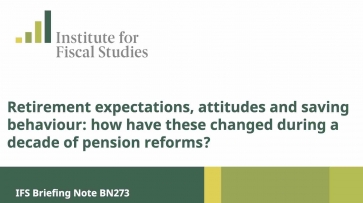 Pension savers are more likely to have a pension than 10 years ago but more are expecting to retire later than their parents’ generation.

According to a study by the Institute of Fiscal Studies people are now much more likely than previously to be planning for a retirement age that is above age 65.

This compares with less than 1% of men and women surveyed a decade earlier.

Despite men and women in this age group now having the same state pension age, women on average still expect to retire earlier, by almost 1 year (at age 64.2 compared with 65 for men).

The IFS also found that confidence in the adequacy of retirement incomes has increased.

The proportion of individuals confident that their income in retirement will provide the standard of living they hope for – although still low at only just over half – increased by 11 percentage points over the decade to 2017 (from 42% in 2008 to 53% in 2017).

The IFS found a sharp increase in the proportion of private sector employees expecting to receive a private pension in retirement, from 63% in 2013 to 73% in 2017, thanks mainly to auto-enrolment.

Only around half of individuals report that they understand enough about pensions to make decisions about saving for retirement. The IFS says this low level of self-reported understanding has been persistent over the last decade, despite pension reforms and consequent discussion of pensions in the media.

The retirement expectations are among the key findings of two new reports published by the IFS and funded by the IFS Retirement Saving Consortium and the Economic and Social Research Council. The think tank used data from the ONS’s comprehensive Wealth and Assets Survey( WAS), a survey of 20,000 households carried out every two years since 2008.

Rowena Crawford, an associate director at IFS and an author of the report, said: “The last decade has seen a striking increase in the ages that those aged 40 to 54 expect to retire at.”

Nathan Long, senior analyst at Hargreaves Lansdown, said: “Evidence shows people in their 40s and 50s making more precise predictions of when they’ll retire, suggesting a greater awareness than in the past. Boosting understanding needs to be the next step on the country’s retirement revolution.”

More in this category: « Openwork and LV= back CII drive to improve female lives FCA launches review of market data and analytics »
back to top