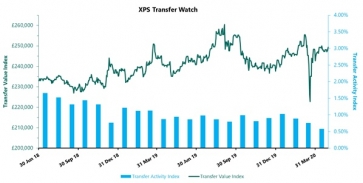 The Coronavirus has resulted in a 30% fall in request for pension transfer quotes at one provider - seen as an indicator of future transfer activity.

However defined benefit transfer values stabilised in April - according to the XPS Pension Transfer Watch - after a turbulent March.

Transfer values increased by about 3% in April although the number of members taking a transfer value continued to fall and reached a record low.

The XPS Transfer Watch monitors how market developments have affected transfer values for an example member, as well as how many members are choosing to take a transfer.

XPS Pensions Group’s Transfer Value Index increased from £242,600 at the end of March, to £249,300 at the end of April. The movement was driven by falling gilts yields partially offset by a smaller fall in inflation.

The XPS Pensions Group’s Transfer Activity Index reported a record low in April as the number of completed transfers fell to an annual equivalent of 0.58% of eligible members, down from 0.76% in March (the previous record low).

Requests for transfer value quotations, an indicator of future transfer business, plummeted by a third year on year, XPS said.

The Pensions Regulator issued further Covid-19 guidance on 29 April, covering communicating with members during the pandemic. As well as recommending that trustees monitor transfer requests for signs of scam activity, the guidance includes a template letter to be issued to all members requesting a transfer value.

The letter, jointly developed with the Financial Conduct Authority and the Pensions Advisory Service, urged members to be cautious when considering transferring out of a defined benefit pension scheme.

Mark Barlow, partner, XPS Pensions Group, said: “The ongoing Covid-19 crisis has predictably caused a dip in transfer activity. The record fall will be a result of some schemes putting a temporary halt on transfers, as well as members (and their financial advisers) being less inclined to transfer in such uncertain times.

“We may see a rebound in activity as we emerge from lockdown, although the observed decline in requests in April suggests that any upturn will be some months away, due to the lag between transfer requests and completions.”

The XPS Pensions Group’s Transfer Value Index shows the estimated Cash Transfer Value of a 64 year old member with a pension of £10,000 a year with typical inflation increases.

More in this category: « Brewin Financial Planning income soars 30% 7 in 10 see share price falls as investment opportunity »
back to top