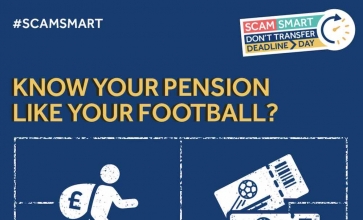 The FCA and The Pensions Regulator have launched a joint football-inspired campaign to warn pension savers of the dangers of pension scams as losses to scammers top £30m since 2017.

The watchdogs have launched an advertising campaign to urge football fans to show scammers the red card.

The regulators say many football fans know more about football finances than their own lifetime savings.

The FCA and TPR have teamed up with football commentator Clive Tyldesley to show there is “no transfer deadline for pensions.”

More than £30.9m has been stolen by pension scammers since 2017, according to complaints filed with Action Fraud, say the regulators.

The FCA says many victims fail to spot the signs of a scam and do not know how much is in their pots.

New research shows that is particularly true for football fans approaching retirement, with just 43% knowing how much is in their pot and nearly half (45%) not knowing how to check if an approach about their pension is legitimate.

As part of their ScamSmart campaign, the regulators have teamed up with football commentator Clive Tyldesley, 65, who urges pension savers: “Scammers are very good at breaking down your defences and putting you under pressure with various deadlines.

“But your pension isn’t a football transfer – there are no deadlines! Your favourite team wouldn't buy a new striker just because his agent says he's good.

“Before you fall foul to savvy scammers, remember to take your time, seek advice, and speak to an FCA—authorised adviser. Don't agree to anything you’re unsure of.”

The regulators believe overconfidence could be an issue with nearly two thirds (65%) saying they would be confident in spotting a scam approach. But 4 in 10 (39%) would put themselves at risk unknowingly by engaging with a common scam tactic such as being told they have a time-limited offer, or that there is a guaranteed high return on their savings.

In a message to consumers, Mark Steward, executive director of enforcement and market oversight, FCA, said: “Fraudsters will seek out every opportunity to exploit innocent people, no matter how much or how little you have saved. You can check the status of a firm before changing your pension by visiting the FCA register, and get advice from an FCA-authorised firm before making any changes to your pension. And give scammers the boot!”

Charles Counsell, chief executive, TPR, said: “Scammers wreck lives and no matter how big or small your savings are, every pot is a target. It may seem tempting to make a change to your pension fund now, but it’s important not to rush.”

More in this category: « 7IM reports pre-tax profit up 15% as AUM grows FOS receives 3,500 Coronavirus related complaints »
back to top