CPI inflation slides down to 0.3% 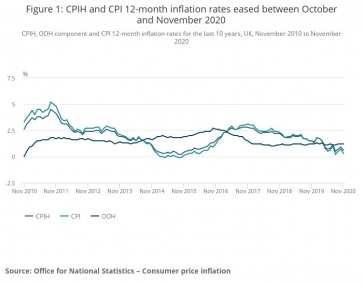 CPI inflation showed a sharp drop last month from 0.7% in October to 0.3% in November as Black Friday price cuts and shop sales nudged prices down.

The wider Consumer Prices Index including owner occupiers’ housing costs (CPIH) 12-month inflation rate was 0.6% in November, down from 0.9% in October.

ONS said falling prices for clothing, food and non-alcoholic beverages resulted in the largest downward contributions to the CPIH 12-month inflation rate between October and November.

While price cuts were evident there were rises in the prices of games, toys and hobbies and accommodation services.

In addition, ONS said that due to renewed Coronavirus restrictions 72 CPIH ‘basket’ items were unavailable in November, accounting for 13.9% of the basket by weight, up from 8 in October but down from 90 in April.

This lack of availability may have skewed figures, commentators said.

Laith Khalaf, financial analyst at AJ Bell, said: “Inflation dropped in November thanks to a Black Friday effect, with increased discounting by retailers pushing down the cost of clothing and footwear.

“Of course, Black Friday occurs every year, but this time around discounts were particularly steep in clothing sales, which led to an unseasonal fall in prices. That highlights the continued pressure on the retail sector, and while price cuts on the shelves are good for consumers, they don’t bode well for profits.

“We shouldn’t set too much store by one month’s inflation figure, particularly this time around when a second national lockdown meant the statisticians weren’t able to collect all of the usual data. However, the broader picture remains one of low inflation and that spells low interest rates for the foreseeable.

“We can expect inflation to tick up next spring, when the basis for comparison moves into the post-pandemic era and the big drop in fuel prices falls out of the equation in March, but that won’t be enough to persuade the Bank of England to tighten monetary policy.”

Derrick Dunne, CEO of Beaufort Investment, said: “The ONS has recorded a sharp drop in inflation for November to 0.3% as the second lockdown took hold. Falling demand for clothing and non-alcoholic drinks played a significant role, while there was a slight uplift in areas such as gaming and toys as the Christmas shopping season came into swing.

“The situation remains fluid, with the pandemic impacting long-standing purchasing trends for food and clothing, hence the surprise dip last month. However, this U-turn in inflation could be short lived, with prices only likely to shoot up once again in the event of a no-deal Brexit.”