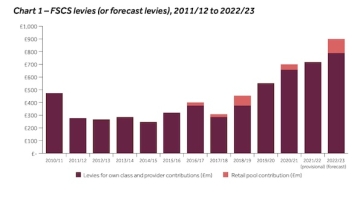 Among the changes under consideration are reducing the scope of the FSCS to pay compensation on some high risk products and charging a premium levy on firms offering riskier investments.

The FSCS has welcomed the review but expressed concern about a potential reduction in protection for vulnerable customers.

The FCA wants the Financial Services Compensation Scheme to be a ‘backstop’ when firms fail and not a part of the regulatory process.

It is concerned some investors may be tempted to invest in high risk products because compensation is readily available if their providers fail.

The FCA will also look at whether HNW and 'sophisticated' investors should be less protected because they are more able to judge risk.

The FSCS is currently funded by a levy on regulated firms but the FCA will look at alternatives including pre-funding the FSCS and a product levy, called for by many.

The FCA remains lukewarm on a product levy but says it will consider all options.

The regulator accepts that the current compensation framework needs to reviewed after widespread criticism of rising costs.

The FCA wants a “fair and sustainable way” compensation scheme and says the FSCS plays a “critical backstop role in protecting consumers and ensuring confidence in financial services markets.”

The FCA will seek views on fundamental questions about the, “purpose, scope and funding” of the FCA's compensation framework to ensure it continues to meet the needs of consumers and firms. It wants submissions and ideas by 4 March.

The watchdog says that many of the claims driving up costs relate to historic misconduct by firms in the investment sector, including financial advisers and Self-Invested Personal Pension (SIPP) operators, which have subsequently failed. This pipeline of historic claims is expected to result in further FSCS payouts over the coming years.

The FCA is committed to “stabilising and reducing” the size of the compensation levy over time. The FCA says it is also improving the financial resilience of firms so they are better able to meet their own redress liabilities and put things right for consumers.

Sheldon Mills, the FCA’s executive director for consumers and competition, said: “We want consumers to have trust in a thriving UK financial services sector, and businesses to be confident that they can bring new and innovative products to market. To achieve this, it is vital that consumers have an appropriate level of protection if things go wrong – and that we find a fair and sustainable way of funding the cost of this protection. Now is the time to ask how we can ensure our compensation framework is fit for the future.

“We are already taking action against the drivers of compensation claims. These include our measures to reduce the impact when firms fail and to tackle misconduct in the investment market."

Caroline Rainbird, chief executive of FSCS, said: "Against a backdrop of rising consumer harm driving a year-on-year rise in compensation costs, I believe it is an important time to consider the composition of the compensation framework and whether it still functions in the most efficient and appropriate manner. We are working in a rapidly evolving marketplace and reviewing what and who FSCS can protect through our compensation service is an important discussion to have - both for today and into the future."

"Reducing protection for vulnerable people who have lost what can be their life's savings, or their chance at a happy retirement, is not something FSCS agrees with. But, reducing harm from occurring and having a framework that enables us to put as many people as possible back on track most certainly is. We have seen the impact the levy has on some firms who make a positive contribution to the UK market. They tell us it is unfair, and in some cases unaffordable. Something must change."

Liz Field, chief executive of PIMFA, said: “Current levels of FSCS funding are unsustainable for well-run firms and indicative of a wider issue whereby consumers continue to be let down. We welcome the fact that the FCA has recognised this problem, as well as the role poor regulation has historically played in contributing to that.

“However, it is disappointing that some of FCA’s proposals today amount to a checklist of existing, and in some cases ill-defined initiatives, which have not in most cases contributed to the significant increases we have seen in FSCS claims. If the industry does need to put up with a higher levy for a few more years in the hope that eventually things will get better, as this review intimates, we believe that there should have been more ambition shown around alternative sources of funding to bring down the current total cost.

“We have been clear with Government and the regulator that the use of FCA fines would embody the polluter pays model, which they have previously expressed as an ambition and its absence remains a mystery as others continue to pollute and our members continue to pay.”

• This is a developing story. Check back later for updates.

More in this category: « Robo adviser Wealthsimple quits UK  Megan Butler to step down as senior FCA exec »
back to top