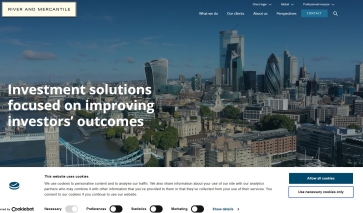 This leaves Martin Gilbert’s AssetCo as the only other company in discussions with River & Mercantile.

Premier Milton said it had concluded that there were insufficient commercial merits to make a formal acquisition proposal.

Premier Miton had previously confirmed interest in acquiring its rival in November after media speculation.

Mike O'Shea, chief executive at Premier Miton, said: “We are most grateful to the board of RMG for their co-operation and assistance as we have assessed the merits of a possible transaction, especially so given the major changes ongoing in their business. We have concluded that there are insufficient commercial merits for our shareholders to make a formal proposal for the acquisition of RMG.

“We wish the employees at RMG well for their future and we look forward with confidence to pursuing our own strategic plans for organic growth while at the same time exploring tactical and strategic opportunities that can further strengthen our business and accelerate our growth.”

AssetCo said it has submitted a non-binding securities exchange proposal for the firm but added that any deal would be conditional on River & Mercantile completing the sale of its solutions business to Schroders.